The stem is the ascending organ of the plant which originates from the plumule of an embryo and grows upwards to the source of light.  It can be distinguished by the following characteristic features:

Branching of the stem:

Mainly two types of branching are found – Racemose or indefinite and Cymose or definite.

In this type of branching, the terminal bud does not grow indefinitely.  After certain period, it ceases to grow so that the growth of the main stem is definite.  As the terminal bud becomes inactive, the lateral bud grows just below it and becomes more active.  After certain period, the growth of these branches ceases and again, lateral branches are produced from them.  The process is repeated and the type of branching is called Cymose branching.  It may be of the following types. 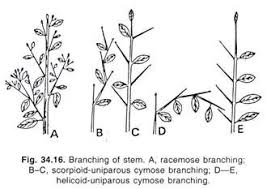 This type of branching is generally found in the lower group of plants.  In this case, the terminal bud bifurcates and gives rise to two branches which develop in a forked manner – example, Marchantia, Psilotum etc.

Stems may be aerial, subaerial or underground.  They may be erect or prostrate.  In general, all these diverse forms of stem can be broadly grouped into two classes – normal and modified.

Creeping stems:  These stems creep over the surface of the soil.  Roots are developed from the nodal regions of the stem.  A creeping stem may be described as prostrate, when it lies flat on the ground as in Oxalis.  When a creeping stem is lifted slightly after creeping for some distance, it is called a decumbent, as in Tridax.  When the branches of a creeping stem spread in all directions, it is known to be diffuse as in Boerhaavia. 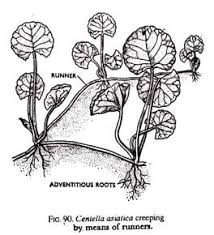 Twiners:  The stem is long and slender and it twines spirally around a support without any organ of attachment.  The support may be a tree or some non-living object.  Such stems are known as twiners, example Clitoria etc. 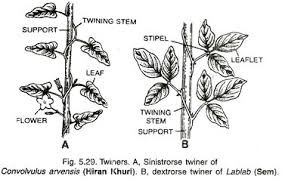 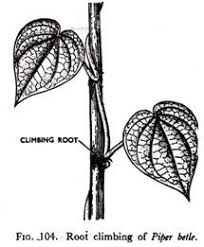