Direct analysis of vacuolar sap of plant shows that both cations and anions accumulate in plant cell in a large quantity against the concentration gradient.  The extent of accumulation is such that ion exchange or Donnan equilibrium theory fails to explain it.

Hoagland (1944) indicates active ion absorption and their (ion) accumulation against concentration gradient in green algae Nitella.  In addition to this, following other observations were made:

The above observation indicates the presence of an ion barrier in the cell which is less permeable to ion than water.  The ions are unable to cross the barrier as rapidly as they are carried to the shoot by the transpiration strain. Ions require energy to cross the barrier.

Evidences in support of metabolic activities:

Following are the evidences in support of the involvement of metabolic activities in absorption of salt.

According to this theory, the plasma membrane is impermeable to free ions but some compound present in it acts as carrier and combines with ions to form carrier-ion-complex which can move across the membrane.

On the inner surface of the membrane, this complex breaks releasing ions into the cell while the carrier goes back to the outer surface to pick up fresh ions.  The concept got support from the following three observations:

Continuous increase in the concentration of salt in the external medium does not increase the rate of absorption beyond a certain limit.  This is because the active sites on the carrier compound become saturated with ions.

Carriers are specific in nature and they absorb specific ions.  They resemble enzymes in this property.   This explains selective ion absorption by roots.  The whole volume of tissue consists of three parts:

Outer free space: It includes the space which allows free diffusion of ions.

Inner space: The space in which ions penetrate with the aid of metabolic energy.

Intermediate space between outer free space and inner space: This space is impermeable to free ions. 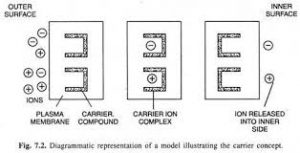 The carrier molecules combine with ions in outer free space and form carrier-ion-complex.  This moves into inner space where it releases ions.  These ions once taken into inner space cannot return back to outer space.

The carrier compound returns back to outer space to pick up free ions.The carriers are specific, i.e., they combine with a particular type of ion.  Carriers are probably proteinacious in nature because addition of protein degrading substances in the system also reduces the rate of absorption.

Unlike facilitated diffusion, active transport is unidirectional, either into or out of the cell. 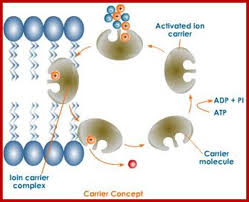 Two possible mechanism of salt absorption on the basis of carrier concept is as follows:

Lundegardh (1954) put forth the cytochrome pump theory.  According to this theory, dehydrogenase reaction on inner side of the membrane gives rise to protons and electrons.  The electron travels over the cytochrome chain towards outside the membrane.  Cytochrome becomes reduced on the outer surface and oxidised on the inner surface.

Then on the outer surface, the reduced cytochrome is oxidised by oxygen releasing the electron (e-) and taking an anion (A-).  The electron thus released unites with H+ and oxygen to form water.  The anion (A-) travels over the cytochrome chain towards inside.

On the inner surface, the oxidised cytochrome becomes reduced by taking an electron produced through the dehydrogenase reaction and the anion (A-) is released.  As a result of anion absorption, a cation (M+) moves passively from outside to inside to balance the anion. 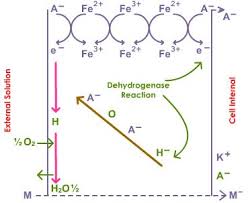 Bennet Clark (1956) put forth the protein-lecitin theory.  According to this theory, a phospholipid compound called lecithin is involved in the transport of ion, as carrier. The compound lecithin is made of phosphatidic acid and choline.

The phosphate group in phosphatide acts an active center for binding the cation and choline.  The complete lecithin molecules when combined with anion and cation move inside and split into phosphatidic acid and choline in the presence of enzyme, lecithinase on the inner space.

Acetyl choline in the presence of enzyme choline esterase converts into lecithin.  The lecithin then moves towards the outer space. 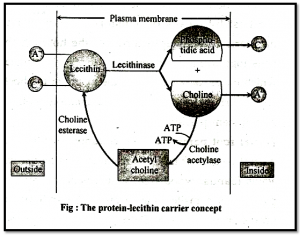