Air pollution is the addition of foreign particles, gases and other pollutants into the air which has an adverse effect on human beings, animals, vegetation, etc.

It is a type of environmental pollution that affects the atmosphere and is the result of burning fossil fuels either in industries, power generation plants or in the internal combustion engines.

Following are the various causes of air pollution:

6.The natural air pollutants include pollen, spores, marsh gas, volcanic gases and synthesis of harmful chemicals by electric storms and solar flares. The major cause of pollution in the urban areas is automobiles which inefficiently burn petroleum, release 75% of noise and 80% of air pollutants.

Primary air pollutants and their effects

Following are the primary air pollutants.

Carbon monoxide occurs in the air due to incomplete combustion, metallurgical operations and naturally by plants as well as animals. It is poisonous on account of having an affinity for hemoglobin approximately 250 times greater than that of oxygen. Upon combining with hemoglobin, carbon monoxide forms stable compound and prevents oxygen, combining with the hemoglobin, resulting in giddiness, headache, cardiovascular malfunctioning and asphyxia. Cigarette smoking increases the carbon monoxide concentration of the blood.

Industrial units, thermal power plants, trains and vehicles release tons of carbon dioxide in the atmosphere. This rise in carbon dioxide concentration prevents more of sun’s heat escaping from the earth, much in the way the glass in a greenhouse does. It results in rise in earth’s temperature and is described as greenhouse effect.

Sulphur dioxide causes irritation of the respiratory system and damages the epithelial lining of the lungs. It can also irritate the conjuctiva of the eye. Sulphur dioxide is injurious to higher plants such as cotton, cereals, grapes, apple, etc.  It also causes erosion of building materials such as marble, limestones etc.

In the air sulphur dioxide combines with water to form sulphuric acid. It is the cause of acid rain.

Suspended particulate matter is differentiated into aerosol, dust and mist. Smoke is similar to dust but consists of visible suspension of carbon and other particles given off by burning or smouldering organic matter.

Soot is a result of incomplete burning of carbohydrates, smoke and fly ash are the fine particulate matter passed out along with gases during burning of coal. Soot, smoke, fly-ash and dust deteriorate the quality of articles, clog stomata, produce allergic reaction, especially bronchial asthma and chronic bronchitis.

Secondary air pollutants and their effects

The photochemical reactions between nitrogen oxides and unsaturated hydrocarbons produce secondary pollutants such as ozone, peroxyacetyl nitrate, aldehydes and phenols.

Aldehydes cause irritation in gastrointestinal and respiratory tract.  Phenols damage organs such as kidneys, liver, spleen and lungs.

They are normal constituents of air. Microbes directly damage the vegetation, food articles and cause diseases in plants, animals as well as human beings. Excess of pollen causes allergic reactions in several human beings. The common reactions are also collectively termed as hay fever.

Following are some of the pollution control measures:

The control measures depends upon the type of pollutant (i.e., gas or particulate). Settling chambers are useful to separate particulate matter of larger sizes . The gaseous pollutant  pass through large chambers settling down the particles of large size . Cyclones are useful in removing particulate matter ranging from 1 to 200 microns. This system works on the principle of centrifugal force. Dirty air is blasted into a conical cylinder with the hollow central tube. As the air enters the cyclone it creates violent swirls. In this process particulate matter is thrown to the periphery. These particles, after striking the wall of the cone, lose their speed due to friction and exit at the bottom. This system removes 70-75 percent particulate matter.

Thermal power plants and several large Industries use electrostatic precipitators to remove particulate matter from the exhaust gases. It works on the principle of electrical charging of dust particles and collecting them on differentially charged platform .

Thermal reactors are useful in vehicles which convert carbon monoxide into pure oxygen.

Use of CNG (i.e.,compressed natural gas) decreases the amount of pollutants in automobile exhausts.

Sulphur dioxide combines with atmospheric moisture and precipitates as sulphuric acid which is termed as acid rain. 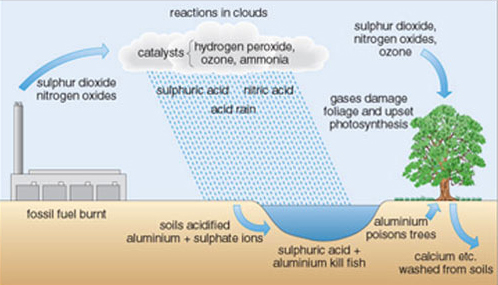