Anaerobic respiration is a process of release of energy in enzymatically controlled incomplete degradation of organic food without oxygen being used as oxidant.  It is an exclusive mode of respiration in some parasitic worms and microorganism for example (bacteria, moulds).

Anaerobic respiration occurs in the roots of some waterlogged plants, muscles of animals, and as a supplementary mode of respiration in massive tissues.

He demonstrated that extract prepared by crushing yeast cells could ferment sugar.  This extract contains an enzyme, zymase capable of fermenting hexose sugar.  Besides zymase, yeast cell also contains enzymes like sucrase and maltase, which can ferment sucrose and maltose respectively.  Direct fermentation of starch by yeast is not possible as it lacks amylase enzyme. Because of the enzyme zymase, fermentation is also termed as zymosis.

Fermentation is  the anaerobic breakdown of carbohydrates and other organic compounds into alcohols, organic acids, gases etc., with the help of microorganisms or their enzymes.  The mechanism of anaerobic respiration is similar to common pathway of aerobic respiration up to glycolysis.

Glycolysis breaks down glucose enzymatically in several steps to form two molecules of pyruvate.  Pyruvate is anaerobically broken down to yield various products depending upon the organism and the types of tissue.  The two common products are ethyl alcohol and lactic acid.

When oxygen is not available, yeast and some other microbes convert pyruvic acid into ethyl alcohol.  It is quite common in fungi (e.g., Rhizopus, yeast) and bacteria.  Yeast can respire both aerobically and anaerobically.  Anaerobic respiration occurs in sugary solution if the fungus is not in contact with the atmosphere.  It causes fermentation.

In the first step, pyruvate is broken down to form acetaldehyde releasing carbon dioxide in the presence of enzyme pyruvate decarboxylase and TPP (thiamine pyrophosphate).

In the second step, acetaldehyde is reduced to ethyl alcohol or ethanol. This reaction also requires an enzyme i.e., alcohol dehydrogenase.  Hydrogen is obtained from NADH2 produced during oxidation of glyceraldehyde 3 phosphate to 1, 3 diphosphoglycerate in glycolysis. 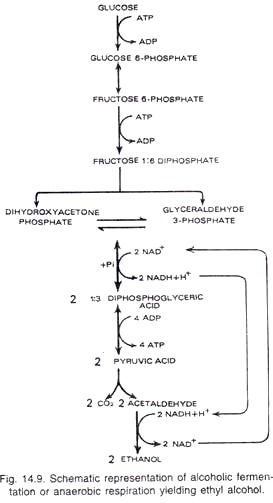 In this process the lactose sugar that is present in the milk, is converted into lactic acid which provides a distinctive sour taste to the milk.  The fermentation occurs in lactic acid bacteria (e.g., Lactobacillus), some fungi and muscles.  Lactic acid that is produced in muscles is sent to liver to regenerate glucose.

In lactic acid fermentation pyruvate, which is produced in glycolysis is directly reduced by NADH2 to form lactic acid.  There is no evolution of carbon dioxide .  The enzyme is lactic dehydrogenase, which requires FMN (Flavin mononucleotide) and Zn2+for the process.

Following are the differences between anaerobic and aerobic respiration:

Alcoholic fermentation has an important role in baking industry .  In the bread making process, yeast undergoes cellular respiration. As a result, it releases CO2 and water helping the dough to rise making it soft and puffy.

In the alcohol Industry:

In the production of vinegar and organic acids:

Microbial fermentation produces citric acid.  Citric acid acts as flavouring agent in foods and beverages such as drinks, wines, Jam, jellies, frozen fruits, desserts etc.  It also acts as an antioxidant and preserves the flavours of food.  It is good for cleaning purpose.