Nullisomics are those individuals, which lack a single pair of homologous chromosomes. The chromosome formula would be 2n-2 and not 2n-1-1, which would mean a double monosomic. 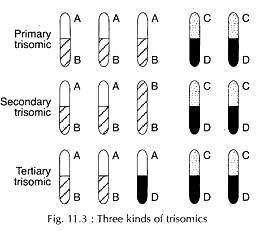 Trisomics also occur in Homo sapiens . Trisomy for certain chromosomes causes definite morphological abnormalities in human beings. Mongolism (i.e., Down’s syndrome) is one such feature, which is common in children. The characteristic features include short body, swollen tongue and eyelid folds resembling those of Mongolian races. 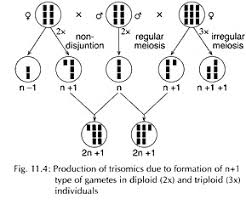 Trisomic has an extra chromosome which is homologous to one of the chromosomes of the complement. Therefore, it forms a trivalent. This trivalent may take a variety of shapes in primary and secondary trisomics.

Trisomics are also helpful for locating genes on specific chromosomes. If a particular gene is occurs on the chromosome involving trisomy, segregation in the progeny of this trisomic will not follow a Mendelian pattern, but the ratio will deviate from normal 3:1 F2 and 1 : 1 test cross ratios.