According to the proponents of physical theories of ascent of sap living cells do not take part in the translocation of water. Rather it is brought about by some physical forces developed in the dead cells.

Some of the important physical theories are as follows:

According to Boehm, water moves upward partly due to capillaries of the tracheary elements and partly due to atmospheric pressure. Capillaries exist in plant body. Finer the capillaries, greater the rise of liquid through them.  This is the basis of capillarity theory proposed by Boehm.

However, the calculations of various workers have clearly revealed that even very fine capillary cannot lift water for long distance.  A capillary of 0.03 mm diameter carries water up to 4 feet.  The diameter of thinnest plant is 0.63 micron.  Hence, this theory was discarded.

Jamin believed that air and water are present in regular alternate layers in xylem. According to Jamin’s chain theory water is pushed upwards when the air expanded. The theory was discarded because it did not account for the rapid unidirectional flow of water.

According to Sach water moves upwards due to imbibitional force between the cell wall of the xylem and the water column.  But, experimentally, it is found that water rises up through lumen of xylem elements and not along their walls.  Hence, this theory was also discarded.

Active transpiration creates vacuum in the xylem elements and to fill up this vacuum, water moves upward from below.  Atmospheric pressure in this way can bring about the rise of water up to 30 feet or above it.  Moreover, operation of atmospheric pressure depends on the free surface at the base, which does not exist in the plant.

This theory was proposed by Dixon and Jolly in 1894 and is based on the following features:

Cohesion means attraction between similar molecules.  The water molecules have a strong mutual attraction, i.e., they tend to stick to each other.  Due to the strong attraction the molecules do not separate from one another.  The magnitude of cohesive force is  about 350 atms which is more than enough for ascent of sap in tall trees. 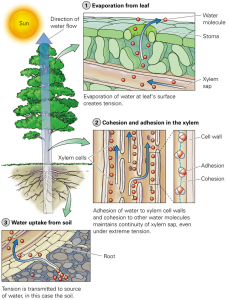 The cohesive and adhesive forces do not allow the water column to break or pull away from the walls of  xylem.  They maintain a continuous water column formed in xylem duct from roots to the leaves.

Xylem vessels are tubular structures which extend from root to the apex of plant cells. They form a continuous tube. One end of the xylem tube  connects with root hairs via pericycle, endodermis and cortex.  The other end connects with sub-stomatal cavities of leaf via mesophyll cells.

The xylem capillaries have water in them . Due to cohesion and adhesion properties of water, the capillaries form a continuous water column.

Unbroken continuous water column fills the xylem elements. As a result a tension or pull generates at the top of the column known as transpiration pull .  This tension is transmitted downwards from petiole, stem and finally reaches to the roots.  This results in the upward movement of water. 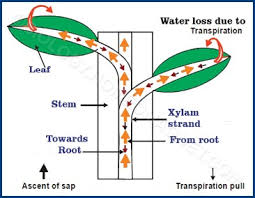 Take a long hollow glass tube and dip one end of the tube in a beaker of water.  Fill the tube with water. Thoroughly soak a piece of sponge. Place the sponge at the top of this tube .Thus there is an unbroken water column in between sponge and beaker.

As  the water evaporates from the sponge, it is pulled up from the beaker. If the above apparatus is placed under fan, the rate of evaporation increases and a greater pull is exerted in upward direction. The continuity of  water column in the tube does not break even under greater pull due to cohesive and adhesive properties of water.

An almost similar system exists in the plant. The sponge here, is compared with the transpiring surface (i.e., leaves), water filled glass tube with the xylem and beaker with the soil serves as water reservoir.