Ascent of sap is the upper movement of sap through stem . In other words, the process of translocation of sap from the roots to the top of the plant is called ascent of sap.

Path of ascent of sap

At first, the root hair cells absorb water.  This water moves through several root tissues such as cortex, endodermis, and pericycle and finally reaches xylem.  Once the water enters into the xylem tissue, it continues its upward movement until it reaches the mesophyll tissue of the leaves.  Water then enters into each mesophyll cell and finally evaporates and transpires through the stomata.  Only small amount of water is used in metabolism and growth.

Malphigi in the year 1675 first introduced the ringing experiment. It consists of removing a ring of bark, i.e., all the tissues outside vascular cambium.  This also includes the vital vascular tissue of phloem.

In this experiment two small twigs or branches are taken.  Girdle or a ring of bark is removed from one of these branches by a sharp knife.  In second twig xylem is removed carefully without causing much injury to the bark.  Or xylem is blocked with grease.

Thus the girdled part of the first twig contains only xylem.  The second twig has all the tissues except xylem.  Both the twigs are placed in separate beakers containing water.  After sometime leaves on the first twig appear turgid while in the second twig (with no or blocked xylem) the leaves droop.

The leaves appear turgid in the first case because they continue to receive water in the presence of xylem.  In the second twig, leaves wilt because there is no conduction of water due to absence or blocked xylem elements.

Thus this experiment shows that water is conducted by the xylem elements. 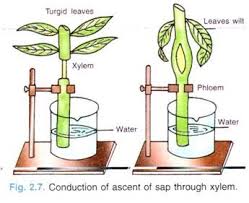 Mechanism of ascent of sap

Many theories have been proposed to explain the mechanism of ascent of sap.  They are as follows:

Westermaier in the year 1883 for the first time suggested that living cells take part in ascent of sap.  Since then, many workers have put forth different views regarding the mechanisms taking place in living cells.

Godlewski (1884) suggested that ascent of sap takes place through xylem parenchyma and medullar rays whereas the vessels and tracheids of xylem serve as reservoir.  Upward movement of water takes place due to the periodic increase or decrease in the permeability of the living cells.  According to him, parenchymatous cells first draw water from the vessel below it and put it into other vessel above it.  Thus, by alternative passage through living and non-living cells, water raises.  This theory is known as relay-pump theory.

The above theory was discarded because of the following reasons:

Sir J.C. Bose invented an electrical probe to detect the activity of cell inside the plant body .  He inserted the needle of an electric probe upto certain distance in the stem, i.e., upto cortex and found pulsating movement in the cortical cells.

J.C.Bose believed that when the cells of this zone expanded, they suck water from outer surface and pumped it into the inner cell on contraction.

He came to the conclusion that cells associated with the xylem show pumping action and pump its sap into the xylem cells. 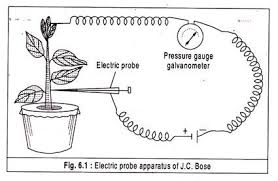 This theory was criticized because:

Molisch (1929) took a drug, which increases the cardiac activity of animals and injected into plants.  He observed the same rhythmic pulsation as found in Bose’s electric probe experiment.  Thus, Molisch supported the Bose’s theory.

Stocking (1956) defined root pressure as the pressure developed in the tracheary element of the xylem as a result of metabolic activity of the root.

When a well-watered potted plant is cut a few centimeters above the soil surface, some amount of xylem sap exude at the cut surface after lapse of time with pressure.  The pressure of exudation is demonstrated by placing a graduated glass tube to the cut end of the stem.  A column of sap is seen to rise in it.  This pressure is actually the hydrostatic pressure developed in the root system due to active absorption of water.  This pressure is called root pressure.

In most of the plant, the magnitude of root pressure is about 2 atm.  In some plants, it is up to 6 atm, which is sufficient to raise water level up to a few feet.

Root pressure theory for ascent of sap is discarded due to the following objections:

It may, therefore, be mentioned that when transpiration is poor, the upward movement of water is affected by root pressure.  Guttation is the best example of root pressure.