Along the electron transport chain there are three sites of energy conservation namely, complexes I, III and IV.  Because of the observed connection between mitochondrial electron flow and ATP synthesis, this conversion of ADP and inorganic phosphate to ATP is termed as oxidative phosphorylation.

Mechanism of synthesis of ATP

Peter Mitchell (1961) and later Nicholls and Ferguson (1992) proposed a mechanism of mitochondrial ATP synthesis.  According to them, the asymmetric orientation of electron carriers within the mitochondrial inner membrane allows the transfer of protons (H+) across the inner membrane during electron flow.

The proton electrochemical gradient is reasonably stable because of the low permeability (conductance) of the inner membrane to protons.  The free energy stored in the proton electrochemical gradient can be utilized in the ATP synthesis.  This process requires an additional protein complex associated with the inner membrane, the CF0CF1-ATP synthase (sometimes also termed as Complex V).

Most of the ATP synthesized in the mitochondrion is utilized elsewhere in the cell. Maximum rates of electron transport and ATP synthesis requires a supply of ADP and inorganic phosphate .  This is accomplished by two separate translocator proteins present in the inner membrane.

This hypothesis was first proposed by Peter Mitchell (1961).  ATP synthesis occurs through chemiosmotic mechanism in chloroplast.  According to Peter Mitchell, the energy transducing membranes are impermeable to H+.  The electron carriers are organized asymmetrically in the membranes.  Beside the electron carriers, some proton carriers are also present which translocate protons across the membrane against the proton gradient.  The ion concentration differences and electric potential differences across the membranes provide free energy.

What causes a proton gradient across the membrane?

In thylakoids, water molecules split in the lumen side resulting in the accumulation of protons in the lumen of the thylakoids.  As a result, the lumen becomes acidic (high concentration of positive hydrogen ions) and the stroma becomes more alkaline (low concentration of hydrogen ions). This develops a difference in the proton concentration across the membrane .  Since protons carry a positive charge, it also contributes to an electrical potential gradient across the membrane.  These two gradients together constitute a proton motive force.  It requires a certain amount of energy to pump the protons into the lumen against a proton motive force. The electron transport provides the energy.

The thylakoid membrane has a low conductance for protons.  As a result, the protons cannot simply diffuse back to the stroma.  The diffusion of the protons to the stroma takes place only with the help of highly specific protein lined channel that extends through the membranes.  These channels are a part of the ATP synthesizing enzyme, ATP synthase.

The enzyme, ATP synthase consists of two multipeptide complexes CF0 and CF1.   The CF0 is a hydrophobic complex (insoluble in water). It is present in the membrane and  thus forms the transmembrane channel.  The other complex CF1 is hydrophilic (soluble in water).  CF1  attaches to CF0 on the stroma side.  The CF1 complex contains active sites for ATP synthesis while the CF0 complex forms a proton channel across the membrane.  The CF0 complex channels the energy of the proton gradient towards active sites of the enzyme. 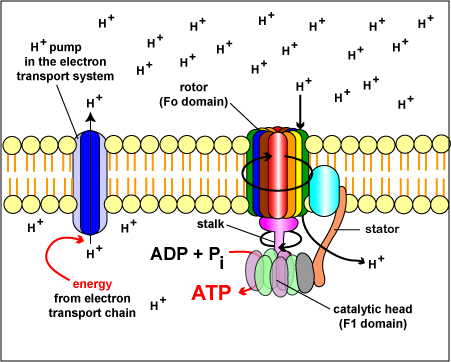 Following are the functions of ATP: