Biochemical mutations are mutations that may not be visible or affect a specific morphological characteristic but may have a general effect on the ability to grow or proliferate.

Beadle and E.L.Tatum got Nobel Prize due to their discovery of biochemical mutations in Neurospora. They proposed a concept termed as one gene-one enzyme hypothesis. The hypothesis states that each gene controls the synthesis or activity of a single enzyme. Mutations in these genes were helpful in elucidating several biosynthetic pathways in a variety of organisms, particularly in microorganisms such as fungi and bacteria.

For the study of these biochemical mutations and mutations for resistance against phages and antibiotics, microbial systems are very useful.

Transplantation of vermilion eye on cinnabar, results into a wild type eye , indicating that a diffusible substance from cinnabar enables the transplanted vermilion eye to develop into wild-type. However, when cinnabar is transplanted on vermillion, no diffusible substance is available which would enable cinnabar to develop into wild type.  This indicates that vermilion colour appears due to a block appearing earlier in biosynthetic pathway than in case of cinnabar. 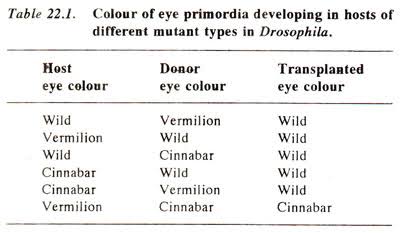 Neurospora, a member of Ascomycetes was helpful in the study of biochemical mutations by Beadle and Tatum.

It can grow on a culture medium which contains a few simple salts, some sugar and biotin. From these raw materials, the organism is capable of manufacturing all other compounds required for its growth. As a result of mutations, strains can be obtained which lack the ability to synthesise one or more of these compounds. While the wild strain which is capable of growing on minimal median is termed as prototroph, the nutritional deficient mutants are termed as auxotrophs.

Bacteria and fungi like Neurospora in proliferating stage is sensitive to penicillin. Therefore, in a suspension culture with minimal medium, addition of penicillin leads to the death of the prototrophs . The auxotrophs will survive due to lack of growth. After killing phototrophs thus, the penicillin can be removed by washing the cells on a filter. If the culture is now plated on a solid medium supplemented with a specific chemical, auxotrophs deficient in this chemical will grow and can be counted and isolated for further study.

In Neurospora, following  three kinds of mutations for arginine synthesis were isolated.

Synthesis of tryptophan in bacteria and Neurospora

In Salmonella typhimurium four kinds of mutants for tryptophan synthesis occur. These mutations include the following:

In Escherichia  coli also five different kinds of mutations termed as trp- A,B,C,D and E occur. These mutations are similar to those described for Salmonella.

Tryptophan synthetase in Neurospora and bacteria: