Conservation of biodiversity is protection and management of biodiversity so as to maintain it at its optimum level and derive sustainable benefits for the present as well as future strategies.

Biosphere Reserves are a special category of protected areas of land wherein people are integral component of the system. The program of Biosphere Reserves was initiated under the ‘Man and Biosphere Programme’ by UNESCO. The purpose of the formation of the reserves is to conserve insitu all forms of life, along with its support system in totality, so that it could serve as a referral system for monitoring changes in natural ecosystems. At present there are 18 Biosphere Reserves in India.

Each biosphere consists of the following zones :

Core zone: Here no human activity is permitted. The area is undisturbed and legally protected ecosystem.

Buffer zone: It surrounds the core area. It allows human activities such as resource use strategies, research and education.

Transition zone (i.e., manipulation zone): It is the outermost or peripheral part of biosphere reserve where an active cooperation is present between reserve management and local people for activities such as settlements, cropping, recreation, forestry and other economic uses without disturbing ecology. Transition zone has different parts such as forestry, agriculture, tourism and restoration regions. Restoration zone includes degraded areas which is selected for restoration to natural or near natural forms. 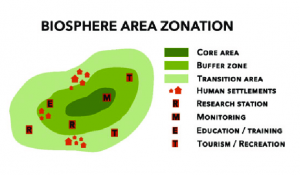 Biosphere reserves help in restoration of degraded ecosystems and habitats. They are a means of conserving genetic resources, species, ecosystems and landscapes without disturbing the local people. They ensure culturally, socially and ecologically sustainable economic development.

There is a regular monitoring of development and conservation progress. Each biosphere reserve supports education and research in various ecological aspects of the ecosystem. There is also exchange of information about research, restoration, conservation and development aspects at the national and global level.

Sanctuaries are the areas for conservation of wild animals. They are tracts of land with or without lakes where wild animals take refuge without being hunted. The sanctuaries prohibit hunting or poaching. However, they allow grazing and collection of minor forest products so long as these activities do not affect the animal life adversely. India has 500 sanctuaries. Of these 28 are tiger reserve governed by The Project Tiger. 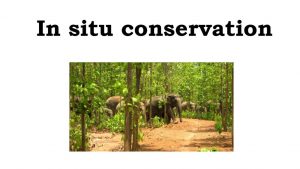 The tribal communities protect patches of forests as a part of their traditional strategy to conserve biodiversity. These are termed as sacred forests. Such forests are common in India and some other Asian countries. In India sacred forests occur from Meghalaya in the Northeast to Rajasthan in the West and also in the states along the Western Ghats. The community designates forest area as protected and to enforce the protection declares it sacred, usually by dedicating it to a diety. In such groves all the vegetation, including shrubs and climbers belong to the diety.

Sacred forests range in size from a few trees to dense forests. For example, forest patches in Yalong and Raliang sacred groves in Jainitia Hills, Meghalaya contain 123 woody species. Sacred groves in Kerala are similarly rich, they contain more than 800 species of angiosperms that is 20% of the flowering plants occur in the state. Among these, 150 plants have medicinal value and 40% are rare and endangered.

Sacred forests are important in many aspects. For example sacred forests are laboratory for botanists, a bank of plant diversity and germplasm for plant breeders and also are community’s medicine chest.

Like sacred forests, there are several water bodies which have been declared sacred by the people (e.g., Khecheoplari lake in Sikkim). It also helps in the protection of aquatic flora and fauna.

Benefits of in situ conservation of biodiversity

Following are the benefits of in situ conservation: