Biodiversity or biological diversity means the variability among living organisms from all sources including inter alia, terrestrial, marine and other aquatic ecosystems and the ecological complexes of which they are  part. These include diversity within species, between species and of ecosystems. The term biodiversity was coined by W.G Rosen in 1985.  Diversity is the key to ensuring the continuance of life on earth. It is also a fundamental requirement for adaptation and survival and continued evolution of species.

Thus biodiversity encompasses the whole range of mammals, birds, reptiles, amphibians, fish, insects, plants and microorganisms such as protist, bacteria and viruses. The range and number of these organisms differ in different ecosystems and climatic conditions.

Biodiversity is recognised at three hierarchical levels (i.e., Genetic diversity, Species diversity and Ecosystem diversity). Biodiversity is dynamic at all the three levels. For example the genetic composition of species changes over time in response to natural and human induced selection pressures. The ecological factors determine the abundance of species in any area. The change in the species composition of an area has its influence on the ecosystem. Thus all the three levels of biodiversity are interdependent.

Variation in the genetic composition of individuals within or among species is termed as genetic diversity. The variations could be in the alleles of a gene, in entire gene or in the chromosomal structure. Scientists estimate that a unicellular organism has genes ranging between hundred to a few hundreds. For example in Escherichia coli there are 4000 genes, Drosophila melanogaster has 32000 to 50,000 genes, Oryza sativa has 32000 to 50,000 genes and in Homo Sapiens there are 35,000 to 45,000 genes. Genetic differences between the individuals of a species provide the basis for the diversity that is found between species.

A species with more genetic diversity can adapt better to the changed environmental conditions. A monoculture which is an aggregation of a single species, though may have more yield, but can be destroyed completely if attacked by any pest or fungus. Thus genetic diversity provides a protection against such diseases. Genetic diversity also prevents the member of one species from successfully breeding with those of another. Therefore, it is a reproductive isolating mechanism and separate gene pool of two related species.

It refers to the diversity of ecosystems and habitats. A wide variety in physical features and climatic situations have resulted in a diversity of ecological habitats such as forests, grasslands, wetlands, coastal and marine ecosystems, and desert ecosystems. These ecosystems harbour and sustain the immense biodiversity.

Alpha diversity (within community diversity): It refers to the diversity of organisms sharing the same community or habitat.

Beta diversity: Beta diversity is the rate of turnover or replacement of species which move from one habitat to another within a given geographical area. For instance, the difference in species composition between a coral reef and the adjoining intertidal zone would be termed as beta diversity.

Gamma diversity: Gamma diversity is used for the rate of turnover or replacement of species between similar habitats in different geographical areas. For example the differences in species composition between the coral reef in the Gulf of Kutch and in Andaman Islands.

Biodiversity is not uniformly distributed throughout the earth. Some geographical regions are very rich in diversity than others. On this basis 12 zones with very high diversity have been identified. These are termed as megadiversity zones or centres. India is one of them. These centres represent 60 to 70% of the world’s biological diversity.

India is rich in its biological diversity due to its unique geographical position. It is located in the South of Asia and has a land mass extending over a total geographical area of about 329 million hectares. It is bound by the Himalayas in the North, the Bay of Bengal in the East, the Arabian Sea in the West and Indian Ocean in the South. As many as 6 types of soils ( i.e., alluvial, black, red, desert, skeletal and laterite) and four climatic regions ( i.e., wet zone, intermediate zone, dry zone and arid zone) occur in India.

Each ecosystem has its own characteristic fauna and flora. There are tropical evergreen forests in States such as Assam, Bengal and Andaman Islands . The moist area of Indian states such as Kerala, Karnataka, Madhya Pradesh, North Uttar Pradesh, Bihar and Orissa have tropical deciduous forests. Temperate forests occur chiefly on mountains of Himalayas and Nilgiri with abundant oaks and conifers. Above 11,000 feet in the Himalayas, there is Alpine vegetation.

India ranks 10th in the world and fourth in Asia in plant diversity, and ranks 10th in the number of mammalian species and eleventh in the number of higher vertebrate. In India so far only 70% of the area has been surveyed by Botanical Survey of India and Zoological Survey of India and have reported 49,000 species of plants and over 81,000 species of animals in 1995. Evidently these numbers represent only a part of what actually occurs in India. Since then, several lower plants and invertebrate animals have been added. Among plants fungi records maximum diversity with about 23,000 species. Similarly, among animals insects with about 60,383 species are the most diverse.

Hot spots are area that are extremely rich in species, have high endemism and are under constant threat. Of the estimated 5.50 million species of biodata, only 1.7 million have been described till date and the distribution is highly uneven. About 7% of world’s total land area is home to half of the world’s species, with tropics alone accounting for 5 millions. Thus the tropical forests are very important as they harbour at least 50% and perhaps more of world’s biodiversity.

Norman Myers developed the concept of hotspots in 1988 to designate priority areas for in situ conservation. Following are the 25 terrestrial biodiversity hotspots:

Plants and animals occur differentially on the globe. Some of the plants and animals inhabit most of the regions, while other occur only on a single island or mountain top, etc. We refer to these highly restricted organisms as endemic species because they are unique to a specific region.

Plant and animal species confined to an area are termed as endemic species. Endemism of Indian biodiversity is significant. About 4,900 species of flowering plants are endemic to the country. Amongst animals, 62% of the  amphibians and nearly 50% of the lizards in India are endemic.

Areas that have great biodiversity and high level of endemism and are under immediate threat of habitat destruction are termed as hotspots. Thus the two important criteria determining hotspots are the number of endemic species and the degree of threat to the habitat. So far 25 hot spots have been identified in the world. These together encompass 44% of the world’s plant species, 28% of the bird species, 30% of the animal species, 38% of the reptile species and 54% of the amphibian species. 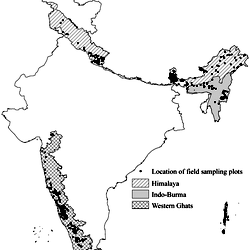