The mechanism of biological nitrogen fixation follows different pathways for free living or asymbiotic and symbiotic systems.  However in both the systems, the molecular nitrogen is reduced into ammonia as the end product before it enters into the metabolic system of plants.  The reactions of nitrogen fixation are catalyzed by an enzyme system called nitrogenase enzyme complex. 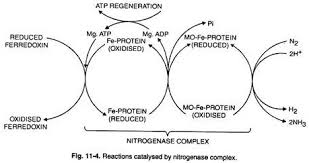 Ammonia and organic acids react to give rise to amino acids.  A part of the fixed nitrogen is handed over to the host by the symbiotic nitrogen fixing microorganisms.  Free living nitrogen fixers do not immediately enrich the soil, it is only after the death that the fixed nitrogen enters the cycling pool.  It occurs in following two steps, ammonification and nitrification.

Plants absorb inorganic nitrogen and convert it into organic compounds, i.e.,proteins.  After the death and decay of organic plants, the protein again comes back to the soil.  In the soil, the proteins are broken into ammonia by active putrefying bacteria (bacteria of decay).  This is done in following two steps:

In this step, amino acids convert into ammonia.  The process involves removal of amino group from amino acid which then converts into ammonia.  Many species of bacillus such as Bacillus ramosus, Bacillus vulgaris, and Bacillus mycoides facilitate the process.  Ammonia thus formed accumulates in the soil and some of it also diffuses into the atmosphere.

Ammonia does not remain in gaseous state in the soil.  It changes to ionic form. Plants can use ammonia directly if the pH of soil is more than 6 and the plant contain abundant organic acids.  Unlike nitrates, very few plants can store ammonium ions, for example (Begonia, Oxalis).  The ammonia converts into nitrate which the plants absorb.

The breakdown of nitrates into gaseous nitrogen or nitrous oxide by some microorganism is termed as denitrification. Under anaerobic condition (for example, water-logging, oxygen depletion) some microorganism use nitrate and other oxidized ions as a source of oxygen.

As a result of denitrification, the soil becomes deficient in available nitrogen (nitrites).  However, at the same time, a certain amount of elemental nitrogen diffuses into the atmosphere from the soil.  This balances the amount of nitrogen removed from the atmosphere by biological nitrogen fixation.

Nitrate is the most important source of nitrogen to the plants.  It accumulates in the cell sap of several plants and therefore takes part in reducing osmotic potential.  First reduction of nitrate to ammonia takes place thereafter the plants use it.  Reduction of nitrate occurs in following two steps:

Reduction of nitrate to nitrite

Reduction of nitrite occurs in the presence of an enzyme, nitrite reductase.  The enzyme is a metalloflavoprotein and it contains copper and iron.  It occurs inside chloroplast in the leaf cells and leucoplasts of other cells.  Nitrite reductase requires reducing power.  The reducing power is  NADPH in illumininated cells and NADH in others.  The process of reduction also requires ferredoxin, which occurs in higher plants mostly in green tissue.  The product of nitrite reduction is ammonia. Following equation represents reduction of nitrite to ammonia:

Ammonia is not liberated but combines with some organic acid to produce amino acid.  Amino acid then forms various types of nitrogenous compounds.

Ammonia combines with a keto organic acid like α-ketoglutaric acid and oxaloacetic acid in the presence of enzyme dehydrogenase (for example, glutamate dehydrogenase, aspartate dehydrogenase),and a reduced coenzyme NADH or NAD(P)H to form amino acid.

Following are the equations of reductive amination:

Other amino acids such as aspartic acid and alanine can also be synthesized by direct incorporation of ammonia into oxaloacetic acid and pyruvic acid respectively.

Ammonia combines with glutamic acid in the presence of an enzyme, glutamine synthetase and ATP.  As a result an amide is produced , termed as glutamine.  Amides are amino acid derivatives in which amino group (-NH2) replaces -OH component of carboxylic group (-COOH).  Amides are, therefore, double aminated keto acids.  The two most common amides are glutamine and asparagine.  Amidation of glutamic acid and aspartic acid hence, result in the formation of the two amides.

Glutamine reacts with α-ketoglutaric acid in the presence of enzyme glutamate synthetase. As a result two molecules of glutamate is formed.  The reaction requires reduced coenzyme, (NADH or NADPH). Following are the equations of catalytic amidation: