Blood group is inheritable. ABO blood system in humans is triallelic system that generates six genotypes. The loss of blood due to accident or disease creates blood deficiency. These persons need blood transfusion from another person (donor). The process needs to be carefully monitored because blood groups need to be properly matched.

(A). Agglutinogen or antigen: It is a protein found on the cell membrane of RBC’S.

(B). Agglutinin or antibody: This is the other protienous substance, found in the plasma of the blood.

Whenever the blood of a person receives foreign proteins (antigen) his blood plasma starts forming antibodies in order to neutralize the foreign antigen.

Similarly antigen B in the presence of antibody ‘b’ becomes highly sticky.  RBC’s containing these antigens clump causing blockage of the capillaries. Some have only one antigen , others have both and still others have none of them. Agglutination in blood is, therefore, antigen-antibody reaction.

Landsteiner divided human population into four groups based on antigens occuring in their red blood corpuscles. Each group represented a blood group. Thus, there are four blood groups viz. A, B, AB and O. He observed that there was a reciprocal relationship between antigen and antibody. A person has antibodies for those antigens which he does not possess. For example, a person of blood group B does not possess antigen A but his blood plasma has antibody ‘a’.

Blood groups in human are inheritable traits and are inherited from parents to offspring following Mendel’s laws. Blood group inheritance depends on genes received from parents. There are three genes (instead of two) which control blood groups. These are termed as multiple alleles. The three (genes or alleles) are located on the same locus on homologous chromosomes. A person can have only two of the three genes at one time which may be either similar or dissimilar.

These genes control the production of blood group (antigen) in the offspring. A gene producing antigen A is denoted by  IA, gene for antigen B by IB and the gene for the absence of both antigens by IO. Letter I (Isohaemagg lutinogen) is a basic symbol for the gene. It is sometimes represented by L (for Landsteiner). Based on this six types of genotypes are possible for four blood groups and human population.

Rh Factor and its Inheritance

Formation of Rh antigen is controlled by dominant gene (R) and its absence by recessive gene (r). People having this antigen with genotype ( RR or Rr) are termed as Rh positive and those whose blood is devoid of it with the genotype (rr) are Rh negative. About 85% human beings in Europe and 97% in India are Rh positive. 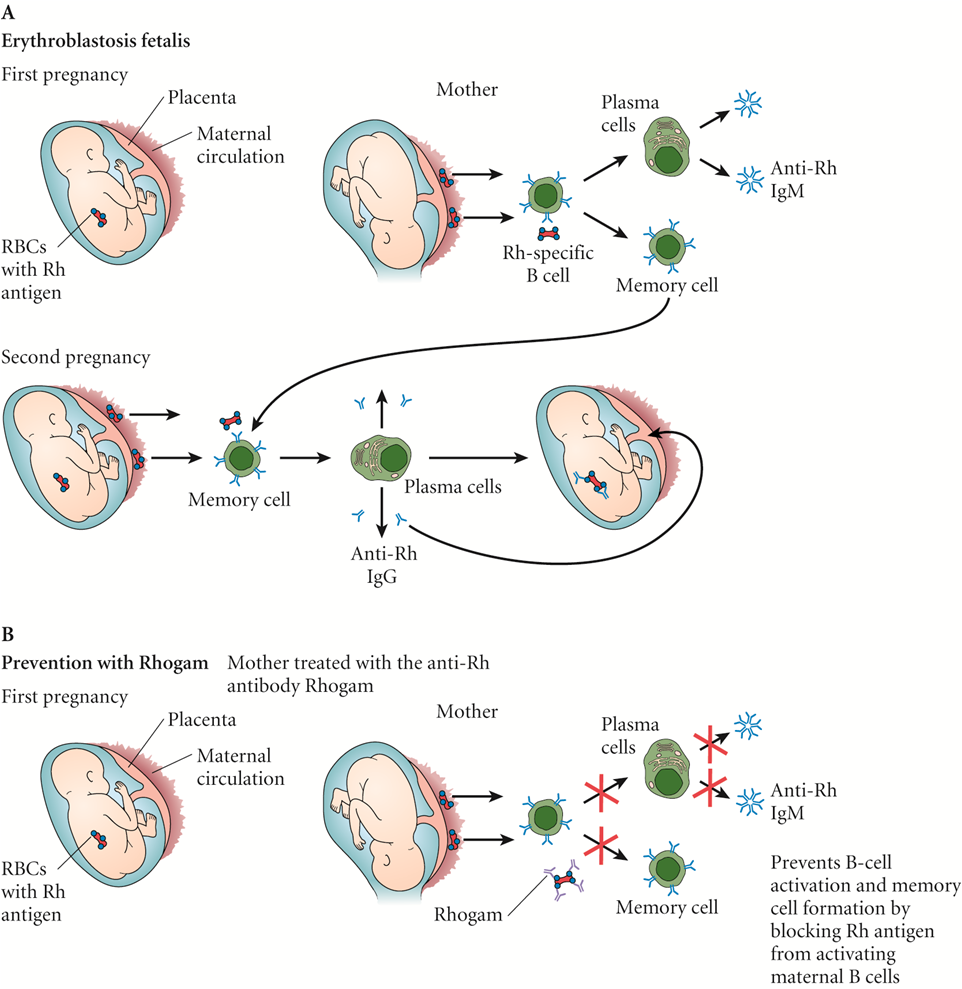 This disease is concerned with the birth of a child related with Rh factor. It causes the death of a foetus inside the woman or just after birth. It was studied by Levine together with Landsteiner and Wiener. The father of Rh affected foetus is Rh positive and the mother is Rh negative. The child inherits the Rh positive trait from the father. A few Rh positive red blood corpuscles of foetus in the womb enter the blood of the mother where they develop Rh antibodies. As mother’s blood is Rh negative i.e., devoid of Rh antigen, it causes no harm to her. These Rh antibodies along with the mother’s blood on reaching the foetal circulation cause clumping of foetal RBCs or agglutination reaction.

The first child is somehow born normal because by that time the number of antibodies in the mother’s blood remain lesser but they increase with successive pregnancies. Thus the foetus following the first child dies inside the womb or just after its birth. This condition is termed as erythroblastosis foetalis.

However, there is no danger if both parents are Rh negative or mother is Rh positive and father is Rh negative. Rh factor serum given to Rh negative mother after each childbirth saves the next child. This serum contains Rh antibodies which destroy the antigens of the foetus before they can initiate formation of Rh antibodies in the mother.