M.D. Hatch and C. R. Slack in 1967, demonstrated an alternate pathway of carbon dioxide fixation, in higher plants found in tropical region. They termed it as the C4 pathway.  They found that in certain plants, the first product of photosynthesis is a 4 carbon acid, i.e., oxaloacetic acid (OAA), instead of 3 carbon compound.

This type of carbon dioxide fixation was first demonstrated in some plants of family poaceae like sorghum, maize, sugarcane (monocots) and in some dicots, for example, Atriplex, Amaranthus, Euphorbia etc. These plants are termed as C4 plants because of the first stable photosynthetic product being a 4 carbon compound.

Following are the characteristics of  C4 plants:

The C4 plants appear to be better equipped to withstand drought and are also able to maintain active photosynthesis under condition of water stress.  Water stress would lead to stomatal closure in C3 plants and consequent reduction in carbon dioxide uptake, whereas in C4 plants, carbon dioxide concentration is higher resulting in the suppression of photorespiratory carbon dioxide loss.  C4 plants often live in hot, arid and saline habitats.  Thus, C4 plants can tolerate halophytic conditions.

Another basic feature of C4 plants is the occurrence of Kranz anatomy in their leaves.  The anatomy of a typical C4 leaf is different from that of C3 leaf.  The photosynthetic parenchyma cells in a typical C3 leaf are organized into two distinct tissues-an upper region of tightly packed palisade cells and the more loosely arranged spongy mesophyll cells bordering large intercellular spaces.

C4 leaves are generally thinner than C3 leaves.  The vascular bundles of C4 leaves are closer and also have smaller air spaces .  Besides, in C4 leaves there are only one type of mesophyll cells which are loosely arranged like those of spongy mesophyll in C3 leaves.

In C4 leaves the chloroplasts present in bundle sheath cells are of abnormal type.  They are large in size, centripetally arranged and lack well-organized grana.  They also contain starch grain.  The chloroplast of mesophyll cells are normal.  Hence, in C4 plants, chloroplasts are dimorphic in nature. 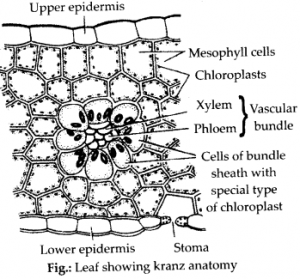 Following are the steps involved in Hatch and Slack pathway or C4 pathway : 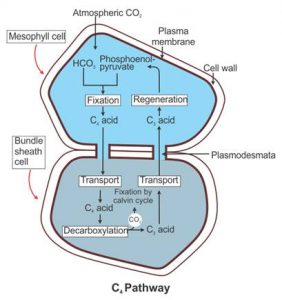 Following are the differences between C3 and C4 plants: