Carbon is an extremely versatile element. The symbol of carbon is C. It is non-metal. It occurs in free as well in combined state in nature.

Reactivity of an element is its tendency to attain a completely filled outermost shell to attain noble gas configuration.

To attain a noble gas configuration
a) Carbon can form an anion (C-4) by gain of electrons. But it will be difficult for nucleus with 6 protons to hold on to 10 Electrons.
b) For carbon to form cation (C+4), it requires loss of electrons, or high energy is required.

As both options are impractical, C atom can share its 4 valence electrons with other C atoms or atoms of non-metals. This type of bonding is called covalent bonding. It is formed by mutual sharing of electrons between the combining atoms.

Properties of covalent compounds:
a)  They have low melting and boiling points.
b) They are poor conductor of electricity as they don’t form ions or have free electrons to act as charge carriers.
c) They are soluble in organic solvents such as benzene, carbon disulphide, carbon tetrachloride, etc. 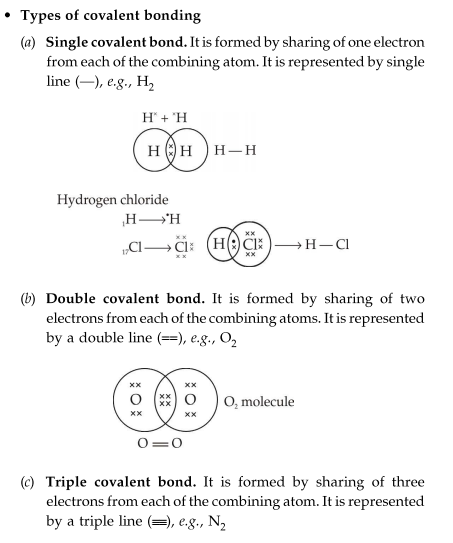 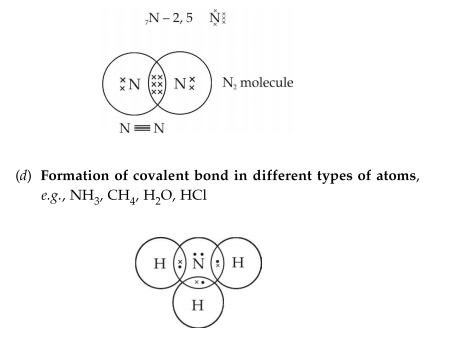 Versatile nature of carbon
i) Carbon can form bonds with other atoms of carbon, giving rise to large molecules. These could be straight chain, branched chain or ring structures. This property is called catenation.
ii) As carbon has four valence electrons (tetravalency), it can bind with four more carbon atoms with single covalent bonds and atoms of some other monovalent elements. 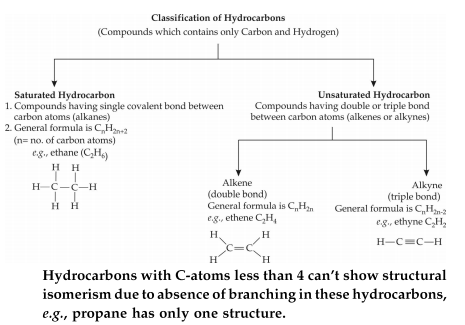 Functional groups : An atom or a group of atoms which makes a carbon compound reactive and decides its properties is called functional group.
The element replacing H is referred to as hetero atom. 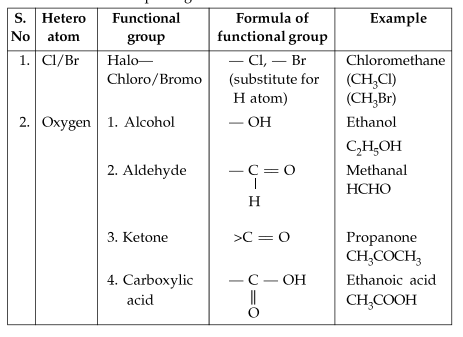 Homologous series : A series of compounds in which the same functional group substitute for hydrogen is a carbon chain, such that successive compound differ by CH2 group, e.g., CH4, C2H6, etc.

Properties of Homologous series:
a) All members of the series differ by a -CH2- unit.
b) The molecular mass of the succeeding members differ by 14 amu.
c) The different members show regular gradation in their physical properties, e.g., melting point, boiling point, etc.
d) Different members of the series show similar chemical properties.
e) They can be representative by a general formula.

Nomenclature of Carbon Compounds :
a) Identify the number of carbon atoms in the compounds and select the word root.
b) Identify the group as alkane, alkene or alkyne.
c) If a functional group is present, it is indicated in the name of the compound as prefix or suffix.
d) In case of suffix, delete the final ‘e’ from the name of the carbon compound and add appropriate suffix. 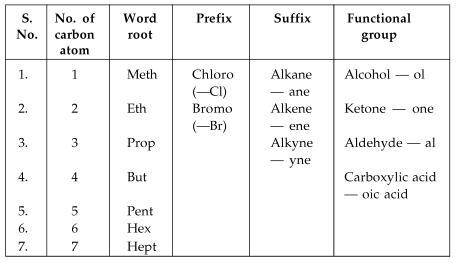