Carbon cycle is a biogeochemical cycle in which carbon travels from the atmosphere into organisms and then back to the atmosphere. The carbon cycle is essential for existence and survival of life. Carbon is a component of all organic compounds of protoplasm like carbohydrates, lipids, proteins, nucleic acid, enzymes, hormones etc. Carbon occurs as graphite and diamond in nature. It also occurs as carbon dioxide in the atmosphere. Fossil fuels like coal, petroleum, and natural gas produce carbon dioxide when burnt.

Carbon content of the atmosphere is estimated to be 6 × 10 14 Kg while that of hydrosphere is 1.3-5 × 10 15 Kg. Lithosphere contains 2.8 × 10 21 kg of carbon.  Carbon present in the atmosphere and hydrosphere is available to the living world as free or dissolved carbon dioxide. The producers take it in the process of photosynthesis and change it to organic compounds. It is estimated that annual amount of carbon fixed in photosynthesis and changed to organic compounds is 7 × 10 13 Kg. Oxygen is released as a byproduct. 1 hectare of healthy and productive forest produces 10,000 kg of oxygen and absorbs 30,000 kg of carbon dioxide.

Carbon shows great versatility in forming bonds with itself and with other elements. Because of the position of its electrons, an atom of carbon can form covalent bonds with hydrogen, oxygen, nitrogen and phosphorus and other carbon atoms.

It can form 4 such bonds at any one time and because of this versatility the carbon atom is the principle building block of many kinds of molecules which make up living organisms.

Carbon dioxide has the unique property of absorbing infrared radiation thus keeping the earth warm. But in recent times because of extensive industrialization huge amount of carbon dioxide has been released into the atmosphere. This has resulted in an excessive absorption of radiation leading to an increase in the atmospheric temperature. A greenhouse effect has been experienced which has affected the functioning of organisms adversely.

The carbon cycle on land

Fossils (of plant and animal origin) found millions of years ago contain carbon compounds.  These fossils (i.e., coal and petroleum) form the most important energy source for modern man and produce carbon dioxide when burnt. Thus the carbon dioxide cycle is maintained by the process of photosynthesis, respiration, decomposition and fossil fuel burning.

Carbon fixed by producers enters the food chain. It passes to the herbivores, carnivores, decomposers etc. During photosynthesis the carbon component of the atmosphere and hydrosphere decreases. Its restoration occurs by the following five methods:

Some carbon is being taken out of circulation and added to lithosphere by hard carbonaceous shells, skeletons of animals, fossilisation, seepage of carbon rich water into interior earth.

Sea water is alkaline and rich in calcium and accelerates carbonate deposition. It contains sodium carbonate whose partial dissociation helps in the formation of sodium hydroxide NaOH. This gives about 24 parts per thousand alkalinity. In warm climates, greater salinity and alkalinity coupled with high temperatures favours the formation of coral reef and thicker shells of molluscs.

When these organisms ( i.e., organisms containing carbonate shells) die, their body decomposes. Their hard shells, due to the activity of sea forms limestone.  On exposure to air, the limestone weather releasing carbon dioxide back to the atmosphere.

Natural exchange between lithosphere and hydrosphere or atmosphere is a very slow process. Major exchange in carbon cycle is between organisms (absorption by produces and release by all in respiration) and atmosphere or hydrosphere. This cycling is a self-regulated feedback system but has recently been upset due to increasing combustion of fossil fuels. As a result carbon dioxide content of the atmosphere is increasing, leading to the disturbance in the climatic conditions of world. 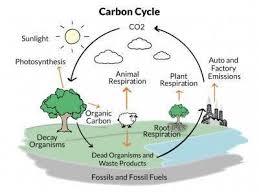 Oxygen cycle is a biogeochemical cycle involving circulation of oxygen in various forms through nature. It is a component of several organic compounds. Oxygen is present in large quantities in the atmosphere.

It also occurs in the bound state in water and as oxides and carbonates in rocks. In the combined form it occurs in carbon dioxide, water and a number of oxidised salts. In nature oxygen occurs in the gaseous form constituting 20% of the total atmosphere. It has been estimated that about 1 ton of oxygen is present per square metre of the Earth’s surface. Plants in all ecosystems release about eight moles of oxygen per year per square metre of the Earth surface during photosynthesis. The plants and heterotrophic organisms use this oxygen in respiration, so that there is a balance between the amount of oxygen production and utilisation.

Use and restoration of oxygen

All organisms which respire aerobically require oxygen. Land organisms fulfill their requirement of oxygen for respiration directly from the atmosphere. Dissolved oxygen and water is the source of oxygen for aquatic life. Some aquatic animals, come to the surface to get oxygen directly from the air. During respiration oxidation of carbohydrate takes place to form carbon dioxide and water. Combustion or burning of wood, coal, petroleum and natural gas also yield carbon dioxide, water, sulphur dioxide, nitrogen oxides etc. Microbial oxidation form another pool of oxides. The reduction of oxides occur both chemically as well as biologically to release oxygen.

Another phase of oxygen is the ozone layer of the outer stratosphere of the atmosphere which protects life from ionising short wave radiations ( i.e., UV rays).

Oxygen is restored through photosynthesis where water splits in the process of photolysis. 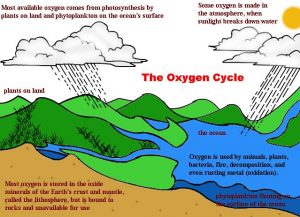