The process of manufacture of food from inorganic raw materials by using chemical energy is termed as chemosynthesis.  There are some organisms that are able to manufacture all their organic food from inorganic raw materials in the absence of light.  They get chemical energy for this purpose by oxidizing different types of substances present in their medium.  The reaction is exergonic (i.e., energy releasing).

The energy required for the reduction of carbon dioxide was obtained from simultaneous oxidation of simple inorganic compound such as hydrogen sulphide (H2S), ammonia (NH3) .  These groups were bacteria which released energy from chemical reaction mostly in the form of ATP.  This energy is much less than required for the reduction of one molecule of carbon dioxide and only a part of energy released becomes available in the form of energy-rich phosphate group (ATP).  Such an energy must, therefore, be pooled before being used.

In chemosynthesis carbon dioxide is reduced to form carbohydrate . This occurs without the participation of light energy and chlorophyll but by utilizing the chemical energy released during oxidation of inorganic substances.  Chemosynthesis occurs only in case of some colourless aerobic bacteria termed as chemoautotrophic bacteria such as; Nitrifying bacteria (Nitrosomonas and Nitrobacter), Sulphur bacteria (for example, Beggiatoa), Iron bacteria (for axample, Ferrobacillus) etc.

These bacteria are classified into the following three groups:

Sulphur oxidizing bacteria are able to grow with sulphur thiosulphates or thiocyanates.  They are obligate aerobes, obligate autotrophs and are acid tolerant for example Thiobacillus thiooxidans, Thiobacillus thioparus, etc.  Following are the exergonic reactions carried out by these bacteria:

Many Thiobacilli oxidize sulphides to sulphur.  These bacteria are entirely dependent for their development on the oxidation of sulphides (e.g., Beggiatoa).  The exergonic reactions are as follows:

These obligate anaerobes use sulphates instead of oxygen to oxidize their food (e.g., Desulphovibrio).

These bacteria oxidize ammonia (NH3) into nitrite(NO2) and nitrate(NO3).  They belong to the following two groups:

Most of these bacteria have been earlier put under the genus Hydrogenomonas.  It is a mixed group.  These bacteria oxidize hydrogen gas to form water.  Thus the chemosynthetic forms get energy by oxidizing hydrogen to water.

Comparision between photosynthesis and chemosynthesis

2. Chemosynthesis occurs at the heart of deep-sea communities, sustaining life in absolute darkness, where sunlight cannot penetrate.  Chemosynthetic bacterial communities live in springs, on lands and on the seafloor around hydrothermal vents, cold seeps and also in sunken ships. Photosynthesis occurs in plants and also in some bacteria, wherever there is sufficient sunlight on land, in shallow water, even inside and below clear ice.

6. End products of chemosynthesis are sulphur and water whereas oxygen is the end product of photosynthesis. 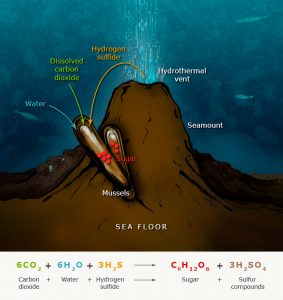 1.  Chemosynthesis allows organisms to live without using the energy of sunlight or depending on other organisms for food.

2.  Microbes living deep in the oceans use chemosynthesis.

Some green and purple bacteria are capable of fixing atmospheric carbon dioxide to organic matter in presence of light.  These are known as photosynthetic bacteria and the process is termed as bacterial photosynthesis.

Following are some of the characteristic features of photosynthetic bacteria:

Following are the overall reactions of carbon assimilation in different bacteria :