Chromosome mapping is the construction of a series of chromosome descriptions that depict the position and spacing of unique, identifiable biochemical landmarks, including some genes, that occur on the DNA of chromosomes.

Gene mapping or chromosome mapping describes the methods used to identify the locus of a gene and the distances between genes.

Criteria used for chromosome mapping in humans include the following:

The basic technique, which has largely been used is the segregation in cell hybrids.

The first step in the study of segregation of somatic cell hybrids involving human cells, is the cell fusion. Induction of fusion of dissimilar cells involve the use of inactivated virus ( i.e.,Sendai virus). The presence of this virus even when killed induces cell fusion.

These fused cells will be heterokaryons having all chromosomes from each of the participating cells. Such fused cells have unstable karyotypes. They can lose chromosomes or chromosome segments without causing any damage to the function of the cell. This is due to the presence of four fold redundancy (each chromosome will be in tetrasomic condition). Such lines could also be prepared where the loss of human chromosome from man-mouse hybrids was preferential and non-random. In these lines, the loss of a single specific human chromosome could be studied by karyotype, so that by relating it with the loss of specific function, a gene can be located on the missing chromosome at specific segment.

Production and selection of markers :

Auxotrophs available in fungi, are difficult to obtain in human cell cultures. Moreover, the recessive mutations will not express themselves due to heterozygosity. The mutations which affect the utilisation of nucleosides or free bases for nucleotide synthesis have been used for this purpose. The free bases or nucleosides may be produced not as intermediate products in nucleotide synthesis, but are produced due to nucleic acid degradation. For cell economy they are used again with the help number of salvage enzymes. Some of the salvage enzymes include the following:

A medium could be prepared, on which these three enzymes are essential for growth of cell hybrids. This was termed as HAT medium. Presence of a base analogue such as bromodeoxyuridine , in the medium, cells definition for a salvage enzyme (thymidine kinase in this case) will prohibit incorporation. Therefore, such deficient cells only will survive. These will be characterized as resistant to this toxic drug and will grow on HAT medium supplemented with thymidylic acid since thymidine kinase is absent.

Assignment of markers to chromosome:

If cells (mouse cell line) resistant to a toxic drug such as bromodeoxyuridine undergoes hybridization with normal human cells, the hybrid cells on continuous divisions in HAT medium lose all other human chromosomes except the one responsible for synthesis of thymidine kinase. The growth of cells on HAT medium takes place only when these cells synthesize thymidine kinase, besides other enzymes. This exceptional human chromosome was always the same i.e., chromosome 17.  We can easily identify it with the help of banding technique. Thus we can easily locate the gene for thymidine kinase on chromosome 17 of humans.

Using resistant lines for several markers, independence or linkage between several genes could be worked out. Differences between human and mouse enzymes could also be worked out and a number of such enzymes could be identified. In these cases absence or presence of enzyme was not in preference but instead migration of enzyme on electrophoretic gel was in preference as a criterion. Of the 17 enzymes, 14 could be lost independently of not only each other, but also independent of the remaining three enzymes which were always lost together. The genes for 14 enzymes thus should be located on separate chromosomes. The three linked genes for enzymes HGPRT, G6PD  and PGK where later found to be present on X chromosome. 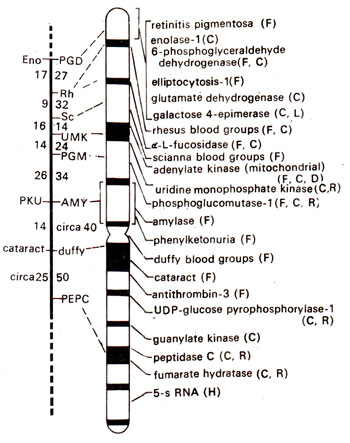 By analysing families with the help of large number of DNA markers, gene distances and linear order of genes can be established. The basis of using families was as follows. The X-chromosome from a maternal grandfather, without undergoing any recombination passes to the mother. Here, it undergoes recombination to be identified in children.  From the data, gene distances and the linear order of genes can be established.

In recent years RFLPs are useful as molecular genetic markers in human beings. The use of a number of restriction endonucleases for digestion of genomic DNA and hybridization with specific genomic or cDNA clones as probes reveals these RFLPs. The techniques used for RFLP mapping in humans differs from those in mice fruitfly or plants. Segregation patterns of the markers is studied within a panel of reference families and recombination frequencies calculated from this finite and limited sample size.