Cloning vectors are DNA molecules that have the ability to carry  foreign DNA fragment. In other words, cloning vector is a segment of DNA capable of carrying foreign DNA or gene of interest. These are also termed as vehicle DNA because they act as carrier of genes to be cloned into a recipient cell. The commonly used cloning vectors are plasmids, bacteriophages, cosmids etc.

Plasmids are self replicating, circular DNA molecules that occur in bacteria as independent extrachromosomal entities.

The circular plasmid DNA as a vector, cleaves at one site with the help of an enzyme (restriction endonuclease enzyme) to give a linear DNA molecule. Insertion of a foreign DNA segment is now possible, by joining the ends of broken circular DNA to the two ends of foreign DNA. Thus regenerating a bigger circular DNA molecule. Selection of chimeric DNA is possible with the help of resistance genes which the plasmid may carry against a certain antibiotic.

The naturally occurring plasmids may not possess all the above and other essential properties of a suitable cloning vector. Therefore one may have to reconstruct them by inserting genes for antibiotic resistance. Some of the examples are pBR322 and PUC vectors.

Following are the characteristic features of artificial plasmids

pBR322 is one of the standard cloning vectors useful in gene cloning experiments. This vector has been reconstructed by inserting genes for antibiotic resistance. It is named after Bolivar and Rodriguez.

Following are the characteristic features of plasmid pBR322: 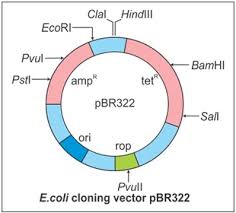 pUC  is another such artificial plasmid vector. The name is from the place of their initial preparation (i.e., University of California).

Following are the characteristic features of pUC vectors 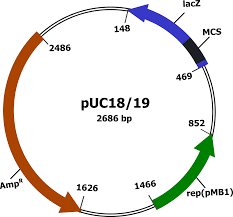 The vectors mentioned above are able to replicate only in E. coli. Therefore many vectors constructed for eukaryotic cells are also functional in E. coli. These vectors are termed as shuttle vectors . These vectors contain two types of origin of replication and selectable marker genes- one for the eukaryotic cell and another for E. coli. The common example of this type is yeast episomal plasmid YEp. Among higher plants, Ti plasmid of a bacterium Agrobacterium tumefaciens is good example of cloning vector.

Bacteriophages are viruses which infect bacterial cells, produce new phages inside the host bacterium, release from the host cell to again infect other bacterial cells. M13 and lambda phages are in common use.

Phage has a linear DNA molecule. So a single break creates two fragments. Insertion of foreign DNA occurs between the two fragments. Such phages when undergo lytic cycle in host will produce more chimeric DNA.

Bacteriophage can accommodate 20 to 25 Kb of foreign DNA. They are helpful in preparing genomic library of eukaryotes. Bacteriophage λ consists of several non-essential segments or regions. The non essential regions can be replaced with equal length of foreign DNA molecule to be cloned. 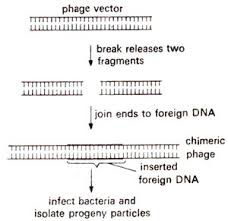 Bacterial artificial chromosome is based on F (fertility) plasmid of E. coli. It contains genes for replication and maintenance of F factor, selectable marker and cloning sites.

Many plant and animal viruses are also useful as vectors for introducing foreign genes into cells and for gene expression and amplification in host cells. Plant viruses such as cauliflower mosaic virus, tobacco mosaic virus, gemini virus, etc. are useful vectors for cloning of DNA segments. A number of animal viruses such as papovaviruses and adenoviruses, retroviruses adeno-associated viruses and herpes virus were helpful in gene cloning.