In plants only chemical coordination is present. Plants are fixed in the soil. So they cannot avoid stimuli by moving away. Also there is no brain-like structure in plants to adapt themselves according to the change in surroundings. Growth in plants is controlled by plant hormones.

Phototropism : Stem tip grows in the direction of light. It is +vely phototrophic.

Geotropism : Response of organism to gravity e.g., root rows towards pull of gravity or downwards. It is +vely geotropic.

Chemotropism : Response to chemicals e.g., pollen tubes grow towards a chemical produced by the ovule during fertilization.

Thigmotropism : Response to touch or solid surface. Tendrils and other climbing parts are positively thigmotropic.

Nastic Movements : The movement of plant neither towards nor away from stimulus is known as nastic movement, e.g. Touch-me-not plant leaves bend and droop on touching – haptonasty. Flowers of ‘Evening primrose’ open at night – photonasty.

Plant Hormones : Phytohormones help in control and coordination in plants. These are chemical substances found in very small quantities in plants tissues.

Phytohormone are produced in any part of the plant and is transferred to another part by diffusion. The growth regulators consist in auxins, gibberellins, cytokinins, ethylene and abscisic acid.

Auxin : They are produced at the shoot tip and help in growth of stem.

Alkylene : Helps in ripening of fruit.

Coordination of body functions in animals are brought about by endocrine glands and nervous system. Endocrine glands produce hormones. Hormones are proteins in nature, they are chemical messengers which are discharged in the body by the ductless or endocrine glands from where they reach different parts of the body. The hormones go to a particular organ and influence its function (target organ). A hormone acts as a trigger or switch. Endocrine glands are controlled by the nervous system which receives information about changes in the external environment in the form of stimuli.

They regulate the secretions of hormones from pituitary gland. They are called neurohormones.

Pineal Gland : Lies in the brain.

Thyroid Gland : Large bilobed gland located behind the larynx in the neck. It secretes thyroxine, a hormone that contains iodine. Lack of iodine causes goitre.

Adrenal Glands : Located on the kidney. They secrete:

Mineralocorticoid : For reabsorption of minerals in nephron.
Glucocorticoid : For reabsorption of glucose.
Androgen : Similar to testosterone.
Adrenaline : Released in times of stress and emotional disturbance. Excitement stimulates adrenaline secretion which increases heartbeat, blood pressure and rate of respiration. It is called emergency hormone or flight hormone.

Testis : In males, main function is production of sperms.

Testosterone : It is secreted by testes and helps in development of secondary sexual characters e.g., moustache, beard, etc.

A neuron is the structural and functional unit of nervous system. A neuron has three distinct regions:

a) Cell Body : It contains a nucleus and other cell organelles. The cytoplasm also have prominent Nissl’s granules.

b) Dendrites : Protoplasmic extensions with numerous fine branches that bring the impulse towards the cell body.

c) Axon : The long process, that conducts nerve impulse away from cell body. It has terminal end fibres  with swollen knobs where impulse is converted into chemical signal.

The functional junction between the neurons is known as synapse.

The information passes through the nerves in the form of chemical and electrical signal called nerve impulse.

Reflex Action : It is an unconscious and involuntary response of efforts to a stimulus.

A message from the receptor is relayed by sensory nerves to spinal cord, which sends information for response via motor nerves to the effectors, e.g., knee jerk refles.

Action : If the response to certain urgent and dangerous situations hold to be a conscious response (e.g., touching a flame) the impulse would be carried by nerve to the brain. The brain would then think and send the response through nerves to different parts of the body. During this time the hand would get burnt. To prevent this the nerves carry the impulse to the spinal cord from where the message is sent to the effector organs through the motor nerve. Such a connection is called reflex arc.

Central Nervous System: It consists of brain and spinal cord. Brain is the highest coordinating centre of the body. It is protected by cranium, a bony box in the skull. It is covered by three membranes. The space between the membranes is filled with cerebrospinal fluid that protects the brain from the mechanical shocks.

a) Enclosed within vertebral column.
b) Surrounded by three membranes.
c) In the centre  of the spinal cord runs a narrow canal. Cerebrospinal fluid is present in it. 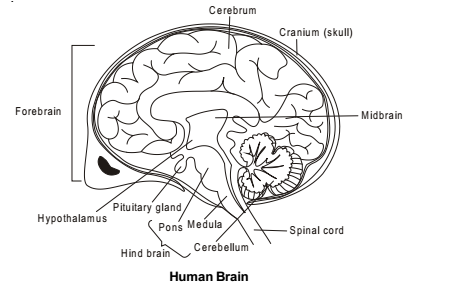 a) Consists of peripheral nerves that control and coordinate the activities of internal organs like heart, kidney, lung, etc.

b) It is voluntary in function.

d) They have opposite effect on the organs. One is inhibitory, the other stimulatory.

e) It helps the body to adjust and maintain the steady state rapidly.

How does Nervous Tissue take Action?