Melvin Calvin and his co-worker (1946-1953) worked out the mechanism of dark reaction in chlorella by using (C14 O2), which is popularly known as C3 pathway or Calvin cycle.

Calvin cycle can be described under 3 stages:

Addition of carbon dioxide to a compound is called carboxylation.  In this step of dark reaction, ribulose 1, 5 diphosphate, (also known as ribulose biphosphate).  A phosphorylated 5 carbon sugar which acts as carbon dioxide acceptor, combines with carbon dioxide.  This reaction is catalyzed by the enzyme, RUBISCO, which results in the formation of 2 molecules of 3-phosphoglyceric acid.

In the first step of Calvin cycle, carbon dioxide is accepted by ribulose diphosphate and it thus enters the cycle.  Later, once glucose is formed, this ribulose 5 diphosphate must be regenerated so that it is once again available to accept carbon dioxide to manufacture hexose sugar.

The regeneration steps require ATP for phosphorylation to form RuBP.  Hence for every carbon dioxide entering the Calvin cycle, 3 molecules of ATP and 2 molecules of NADPH are required.  To make 1 molecule of glucose, 6 turns of the cycle are required. 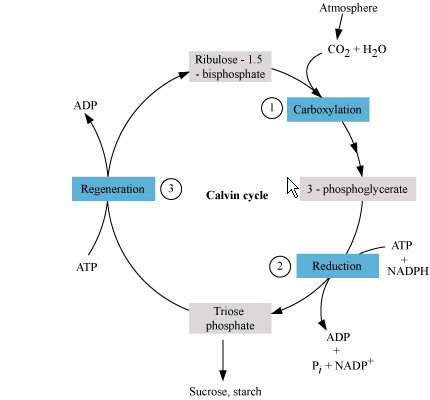 THE VARIOUS STEPS INVOLVED IN CALVIN CYCLE/ C3 PATHWAY ARE AS FOLLOWS:

Step6:  Fructose 1-6 diphosphate is then converted into fructose-6-phosphate by losing a molecule of phosphate in the form of H3PO4 in the presence of enzyme, phosphatase and water.

Step 7:  Out of 3 molecules of fructose 6 phosphate, 1 molecule converts into fructose or glucose and is released as final product of photosynthesis.

Step 10:  Sedoheptulose-1, 7 diphosphate is then converted into sedoheptulose 7-phosphate in the presence of enzyme, phosphatase and water.

Step 14:  All the 6 molecules of ribulose 5-phosphate are converted into ribulose 1, 5-diphosphate in the presence of ATP and enzyme phosphoribulokinase.

Some members of the family Crassulaceae like Bryophyllum, sedum, kalanchoe and some other plants like cactus, orchid etc., display diurnal pattern of organic acid formation, i.e., accumulation of organic acid occurs in the leaves at night and decreases during the day.  These plants are also known as CAM plants.  These plants are usually succulents which grow under extremely xeric condition.  The stomata of these plants remain closed during daytime and open at night.  In darkness, stored carbohydrate is converted to phosphoenol pyruvic acid which reacts with carbon dioxide to form oxaloacetic acid.  It is converted to malic acid as that of C4 pathway.