According to J.D. Watson and F.H.C. Crick (1953) deoxyribonucleic acid has a double helical structure. It consists of two polynucleotide chains connected by hydrogen bonds  running in opposite directions.

Deoxyribonucleic acid (DNA) is the fundamental building block of all living cells. It is a polymer consisting of a large repetition of monomer sequences. The monomer units of DNA are nucleotides. Each nucleotide consists of three components, deoxyriose (a 5-carbon sugar), a nitrogen-containing base attached to the sugar, and a phosphate group.

Similarly, there are two main purine bases, adenine and guanine.

A base in combination with the sugar molecule is termed as nucleoside. Following are the four different nucleotides  occuring in DNA.

In case of RNA, ribose replaces deoxyribose and uracil replaces thymine. Corresponding nucleosides would therefore be

Following are the four nucleotides occurring in RNA

1. Each  nucleotide consists of sugar, phosphate and nitrogenous base.  Many such nucleotides  link by  phosphodiester bonds, thus forming a polynucleotide chain or strand.

4. Polynucleotide strand is made of backbone of sugar and phosphate thus forming its long axis and bases at right angles to it.

5. Chargaff’s rule that in  natural DNAs, the base ratio A/T is always close to unity and the G/C ratio also is always close to unity indicating that A always pairs with T and G pairs with C. A and T, and G and C are therefore complementary base pairs. Thus, if one DNA strand has A, the other would have T and if it has G, the other would have C. Thus, if  the base sequence of one strand is CAT TAG GAC, the base sequence of the other strand would be GTA ATC CTG. Hence, the two polynucleotide strands are complementary to one another.

7. The two polynucleotide chains coils helically around the same axis in such a way that these can separate from one another only by uncoiling. Helical coiling is supposed to be right handed. This right handed form of DNA is now termed as B-DNA.

9. Double stranded DNA molecule has a diameter of 20 angstrom i.e., the distance between two polynucleotide strands is 20 angstrom.

10. The helix makes one complete turn every 34 angstrom along its length. This is also the diameter of the helix. There are 10 nucleotides per turn of helix. Thus the distance between two neighbouring base pairs is 3.4 angstrom (Å). 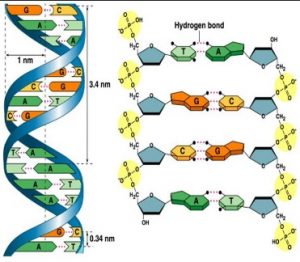