Auxins are weakly acidic growth hormones having an unsaturated ring structure.  They are capable of promoting cell elongation, especially of shoots.

Charles Darwin (1880) discovered the existence of plant growth hormones while working on canary grass.  He demonstrated bending of grass coleoptile towards unilateral source of light. Decapitating coleoptile or covering the tip with black cap resulted in loss of sensitivity of the plant towards light.  Replacing the decapitated coleoptile or removing the cap results in bending.

Boysen-Jensen (1910-1913) observed that coleoptiles with decapitated tips did not bend towards light.  Boysen-Jensen  showed that normal bending occurred if the tip was cut off and replaced with an intervening block of gelatin.  It was, thus, evident that the influence was due to chemical diffusing through the block of gelatin.

Paal (1914-1919) demonstrated that coleoptile would bend even in dark after certain treatments. He sliced off the coleoptile tip and replaced it eccentrically, causing the shoot to stagnate on the side that received its chemical influence.

W. Went (1928) placed several decapitated tips of Avena coleoptile over a thin block of agar-agar. The coleoptile was allowed to stay on agar block for some time. The block was then cut into small pieces and each piece was placed eccentrically on the cut end of coleoptile.

Even in darkness, characteristic bending was observed.  This clearly demonstrated that the substance responsible for growth was synthesized on apex and translocated downwards .  Went named this chemical influence as auxin.

Translocation of auxin in plants:

It has been demonstrated that upward movement of auxin from root to shoot takes place through xylem and downward movement through phloem i.e., from shoot to root. This basipetal (from apex to base) movement is called polar transport.

In the study of biologically active substances several methods are used to determine their presence and effects. All such studies in which a living test material is used are known as bioassays.

An agar block without auxin is placed on another decapitated coleoptile. This serves as control. 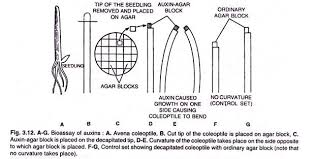