Corolla is the second accessory whorl of a flower and the individual members of this whorl are called petals.  Each petal consists of a narrow basal portion called the claw and an upper expanded portion called the limb.  The petals may be polypetalous (free) or gamopetalous (united).  The corolla may be actinomorphic (regular) or zygomorphic (irregular).

In a gamopetalous corolla the united basal portion is known as corolla tube and the upper free portions are known as the corolla lobes.  Tube- like appendages develop from the corolla to store nectar.  These are called the spurs.

Types of corolla:  There are various forms of corolla.  Some of them are described below. 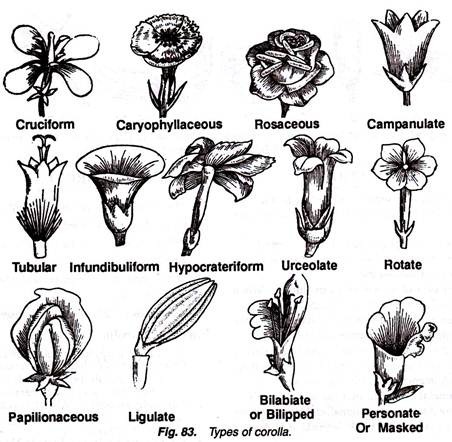