Gynoecium or pistil is the fourth whorl of the flower.  It is the female reproductive part of flower.  The individual members of the pistil are called carpels.  When the pistil consists of one carpel, it is called monocarpellary or simple pistil, example Dolichous, Pisium, phaseolus etc.  When the number of carpel is more than one, it is said to be polycarpellary or compound pistil.

Each pistil or gynoecium is made of three parts-the enlarged basal region called the ovary, a stalk-like style and a terminal expanded portion, the stigma.

The ovary is the swollen basal portion of pistil or gynoecium.  It is formed due to the fusion of the margins of one or more carpels.  In an apocarpous pistil, each carpel is separate and has separate ovary, style and stigma.  In such pistil, an aggregation of free ovaries is seen.  The ovary of a polycarpellary pistil is chambered according to the number of the constituent carpels, for example, if there is only one carpel, the ovary is one chambered and if there are two or five carpels, the ovary is two or five chambered respectively.

It is considered that each carpel is a leaf-like structure and due to infolding and fusion of their margins, the carpels are formed.  The junction where the margins of the carpel fuse is known as the ventral suture and the region corresponding with the midrib is the dorsal suture.  Inside the ovary and along its ventral suture is developed a mass of tissue, called the placenta, which subsequently gives rise to the ovules. 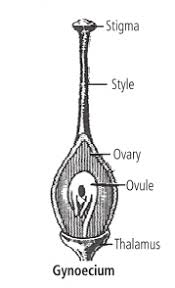 The portion of the ovary to which the ovules are attached is known as the placenta.  The mode of arrangement of placentae inside the ovary is called placentation.  The different types of placentation are as follows: 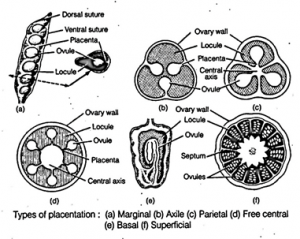