The fusion of nuclei of male and female gametes is called fertilization.  It was discovered by Strasburger in the year 1884.  In seed plants, fertilization takes place in the embryo sac. The pollen grain received by the stigma germinates, produces pollen tube and carries the male gametes to the egg cell.  This process is known as siphonogamy.

Germination of pollen grain on stigma and growth of pollen tube:

Germination of the pollen grain on stigma is the first step in the process of fertilization.  Pollen grain after landing on the receptive stigma firmly adheres to the stigmatic surface.  The stigma exudes sticky oily or mucilaginous substances which help in the process of adhering pollen grains on the stigma.  The stigma first recognizes the pollen and if it is compatible, only then it germinates.  Otherwise, it is rejected (pollen-pistil interaction).

The time taken by the pollen grain to germinate on a receptive stigma depends upon their longevity which varies from few hours to several months in different species.  Besides this, availability of moisture and favourable temperature is also essential for the germination of pollen grains.  The pollen grains after absorbing moisture from the stigmatic surface slightly increase in size, which leads to the activation of their cytoplasm.

Flowers such as Amaryllis, Gladiolus, Linum, Vigna etc., .have hollow style whereas some flowers have solid style, such as Solanum, Petunia, Lycopersicon.  In case of hollow styles, the mucilaginous secretion lining of the stylar canal helps in the passage of pollen tube through the style.  In case of solid style, the styles have a specialized tissue called, conducting tissue or transmitting tissue along which the pollen tube grows.

Entry of pollen tube into the ovule:

Pollen tube may enter into the ovule by any one of the following routes:

Entry of pollen tube into the embryo sac:

In the embryo sac, the pollen tube either passes between the synergid and the egg cell or enters into one of the synergids through the filiform apparatus.  The synergid which is destined to receive pollen tube shows signs of disintegration immediately after the pollination.

The growth of pollen tube in the stylar canal, its entry into the embryo sac and fusion of male and female gametes are also determined by the pollen-pistil interaction. The contents of the pollen tube are discharged into the degenerating synergids either through an apical or sub-apical pore.  The tube does not grow beyond this.

The male gametes are released in the embryo sac.  Out of the two male gametes, one fuses with egg or oosphere resulting in the formation of diploid zygote.  The process is called syngamy or generative fertilization or true fertilization.

The other male gamete enters the central cell and fuses with two polar nuclei or the secondary nucleus.  This results in the formation of a triploid primary endosperm nucleus.  Since, this process involves fusion of three haploid nuclei (two polar nuclei and one male gamete), it is known triple fusion.

In angiosperm or flowering plants, two acts of fertilization occur in the same embryo sac, one generative and other vegetative.  The fusion of one male gamete with the egg and that of other male gamete with polar nuclei or secondary nucleus is called double fertilization.  Thus, it involves both syngamy and triple fusion.  This unique feature of angiosperm was first demonstrated by Nawaschin (1898.) in Fritillaria and Lilium.

The diploid zygote develops into an embryo and the primary endosperm nucleus forms the endosperm. 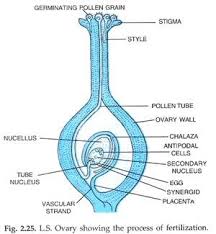