Megasporogenesis is the process of formation of megaspores from the megaspore mother cell.  In the hypodermal region of nucellus towards the micropylar end develops a primary archesporial cell.  It is distinguished from the other cells by its dense cytoplasm and a prominent nucleus.

In the former case, there is no nucellar tissue between the megaspore mother cell and nucellar epidermis.  Such ovules are called tenuinucellate and are characteristics of gamopetalous and dicotyledons with unitegmic ovules.

The megaspore mother cell divides meiotically to form four haploid megaspores.  These are arranged in a longitudinal row (linear tetrads).  Occasionally, megaspore cells arrange themselves in T-shaped or inverted T-shaped tetrads.  Megaspore is the first cell of the female gametophyte.

The process of development of female gametophyte or embryo sac from megaspore is called megagametogenesis.  On the basis of their development three types of embryo sacs can be distinguished.  These are monosporic, bisporic and tetrasporic.  Embyo sac developed from a single megaspore is called monosporic. Embryo sac developed from two and four megaspores are called bisporic and tetrasporic respectively.

In the development of a typical monosporic embryo sac, only one out of the four megaspores takes part.  A monosporic 8-nucleate embryo sac, known as polygonum type occurs in about 70% of the angiosperms and is the most common type.

During the development of polygonum type of embryo- sac, the functional megaspore undergoes three mitotic divisions to form eight 8-nucleate embryo- sac.  Among these, four nuclei are present at the micropylar end and the other four at the chalazal end. 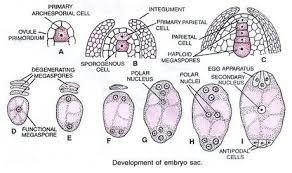 Egg-apparatus: This is a group of three cells situated at the micropylar end.  The three micropylar cells are collectively known as egg-apparatus.  They are pyriform in outline and are arranged in a triangular fashion.

The centrally located cell is called the egg cell or oosphere.  It bears peculiar wall thickenings called filiform apparatus towards the embryo sac membrane, a central or micropylar vacuole and a nucleus towards the chalazal end.

The remaining two cells are called synergids or help cells.  The synergids show a filiform-apparatus attached to their upper wall, which is known to attract and guide the pollen tube.

The synergids help in obtaining nourishment from the outer nucellar cells, and function as shock absorbers during the penetration of pollen tube into the embryo sac.

Polar nuclei: These are situated in the centre of the embryo sac representing a large binucleate central cell.  Generally, both the polar nuclei fuse before fertilization and form a single diploid nucleus called secondary nucleus or definitive nucleus.

The definitive nucleus fuses with one of the male gametes of the pollen grain to form the endosperm nucleus which later grows into the endosperm of the seed.

Antipodals:  The three cells situated at the chalazal end are called the antipodals.   They are vegetative cells of the embryo sac.  These cells generally degenerate soon after fertilization.  Internally the antipodals are connected with the central cell by means of plasmodesmata.

Thus, a mature monosporic polygonum type of embryo sac at the time of fertilization is seven celled and eight nucleate. 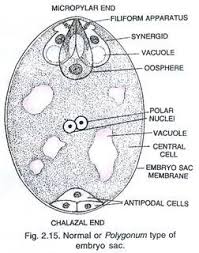 An embryo sac is said to be bisporic when it develops from one of the two dyads formed as a result of first meiotic division of the megaspore mother cell, the other dyad degenerates.  Sometimes, meiotic division of the megaspore mother cell is not accompanied by wall formation and as such, all the four nuclei take part in the development of the embryo sac.  Such embryo sac is known as tetrasporic.