The transverse section of a mature anther shows the following:

Wall of the anther:  The anther wall consists of four layers.  These are epidermis, endothecium, middle layers and tapetum.

Epidermis:  This is the outermost layer.  It is only one cell in thickness.

Endothecium:  This layer is situated just below the epidermis.  It is a single layer of radially elongated cell with fibrous thickening. Because of the presence of fibrous thickenings, the endothecium is also called fibrous layer.  In between these cells, a few cells without thickening are also present.  These thinned wall cells collectively form the stomium or line of dehiscence.

Middle layers:  The middle layers consist of three to four layers of thinned wall cells.  These layers are situated below the endothecium.  These layers generally degenerate to provide nourishment to the growing microspore mother cells.

Tapetum:  Tapetum is the innermost layer of the wall and is multinucleate.  The tapetal cells provide nutrition to the developing microspores.  Tapetum secretes both enzymes and hormones.  Tapetum is of two types-Secretory or glandular tapetum.and amoeboid or plasmodial tapetum. Pollen chamber:  The pollen chamber forms the central cavity of anther lobe.  The process of microsporogenesis takes place in the pollen chamber.

Microsporogenesis is the process in which each micropore mother cell divides meiotically to form four haploid microspores or pollen grains.  The arrangement of pollen grain in a tetrad is affected by cytokinesis during meiosis.  It is of following types:

There are five types of tetrads – tetrahedral, isobilateral, decussate, T-shaped and linear.  Among these, tetrahedral tetrad is the most common.  In the members of family Cyperaceae, pollen mother cell divides meiotically to form four nuclei.  Of these, three degenerate, the remaining nucleus form the only microspore.  Thus, in the members of Cyperaceae, only one microspore is formed by one pollen mother cell instead of usual four.

In Drosera, Typha etc., all the four pollen grains do not separate but together form compound pollen grains.  In Mimosaceae, 8 to 64 pollen grains remain united together.  In Calotropis and some orchids, all the pollen grains of an anther lobe form a typical structure called pollinium. 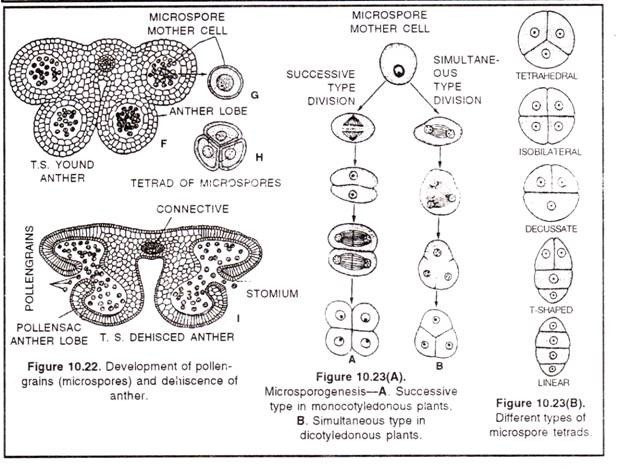 Microspore or the pollen grains

Microspore or the pollen grains is the first cell of male gametophyte.  It is unicellular and haploid and its shape varies from oval to polyhedral.  Inside each anther, there are several thousands of pollen grains.

The wall or covering of pollen grain is called sporoderm.  It is made of two layers.  The outer layer is called exine.  It is thick and ornamented.  The exine is made of fatty substance called sporopollenin.  It is biologically the most resistant substance and can withstand high temperature and strong acids and alkali.

In insect pollinated flowers, the exine of the pollen grain is covered with a yellowish viscous and sticky substance called pollenkitt.  This is a protective envelop which sticks to the body of the insect and helps in pollination

The inner layer, called intine, is thin and uniform.  It is made of pecto-cellulose.  At the time of pollen germination, intine comes out of the germ pores in the form of a pollen tube. 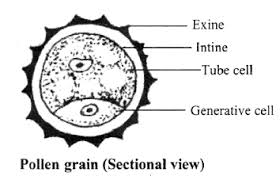 The cytoplasm of pollen grain is rich in nutrients.  The size and form of pollen grain and ornamentation of exine are characteristic of a plant.  Pollen grains of many species cause severe allergies and respiratory disorders such as asthma, bronchitis etc. 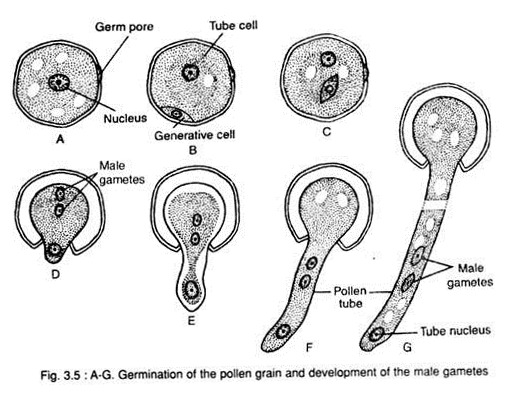