A simple leaf has a single, entire or lobed lamina or blade.  When the lamina becomes lobed due to incision, the lobes remain attached to one another by a portion of the lamina.

In case of a compound leaf, the lamina is divided into separate segments, each of which gives an appearance of a small leaf called the leaflet.

Incision of the lamina:

In typical simple leaf, the lamina is not lobed or incised, example Mangifera, Ficus etc.  When the margin of a simple leaf is cut into a number of connected lobes or segments it is known as incision of leaf.  Incisions of leaf are of two types – pinnate and palmate.

When an unicostate leaf is incised, it is called pinnate incision.  They are of three types.

When the incisions almost reach the midrib and the lamina cuts into a number of segments, the leaves become a pinnately compound leaf, example, rose.

When a multicostate leaf is incised into a number of lobes, it is known as palmate incision.  Palmate incision is of three types.

If the incisions almost reach the base of the lamina completely separating the lobes, the leaf is said to be palmately compound as in Bombax.

Leaves may be modified to certain special forms in order to perform specific functions.  Different types of modifications of leaves are as follows:

A part of the leaf or the whole leaf may be modified into hard pointed structure called spine.  In case of date palm, the apex of the lamina is modified into spine whereas in case of Opuntia, the entire leaf along with the small leaves of the axillary bud are modified into a bunch of spines.  These spines save the plant from external injury by animals.  Spines are also noticed in the apex and margin of the leaf lamina of Argemone.

The whole leaf or part of the leaf may be modified into the slender thread-like coiled structure called tendril.  Example, Pisum, Lathyrus,etc.  The leaf tendrils help the plants to climb upon the support. 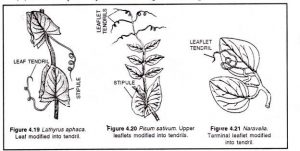 Leaves are sometimes modified into thick membranous structures called scale leaves.  The leaves in case of Asparagus and Casuarina give protection to the axillary buds.  The scale leaves sometime become fleshy and store food material in them as in onion. 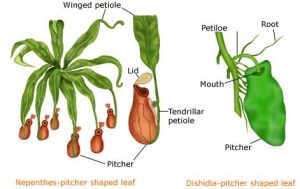 The leaves of Utricularia or bladder wort are very much segmented.  Some of these leaf segments are modified into small bladders.  Each provided with a trap-door entrance.  The trap door allows the small aquatic animals to enter in, but prevents their exit.  Inside the bladder, the aquatic animals are digested and are used by the plants as nitrogenous food.