Flower is the reproductive structure found in the flowering plants.  Flower is attached to the stems by a stalk called, the pedicel.  The terminal portion of the pedicel is swollen and is known as thalamus.  The pedicel in many flowers is condensed or reduced and such flowers are known as sessile.  A flower having a pedicel is called pedicellate.

On the thalamus are borne the different floral parts which are arranged in a whorl.  A typical flower consists of four whorls – calyx, corolla, androecium and gynoecium.  Calyx is the outermost whorl and each individual member of the calyx is called sepal.  Sepals are usually green in colour.  The next whorl lying internal to calyx is corolla. Each individual member of this whorl is called petal.  The petals are usually coloured and showy.  The two outer whorls constitute the accessory whorls, which protect the inner whorls.

The third whorl consists of the reproductive organ known as androecium.  The individual membranes are called stamens.  Each stamen consists of filament and anther.  The anther consists of four chambers called the pollen sacs.  Within the pollen sacs pollen grains or male pores are present.

The fourth or the inner most whorl consists of the female reproductive organ known as gynoecium or pistil.  Each member of this whorl is known as carpel.  Gynoecium consists of three parts, the basal portion is swollen and is known as ovary.  The ovary contains small egg-like structures.  These are the female pores known as ovules.  The portion lying above the ovary is pistil and the terminal portion of the pistil is stigma. 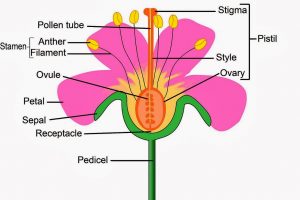 Parts of a flower

The thalamus of a flower is condensed and is a slightly swollen structure.  The nodes and internodes lie close to one another.  Sometimes the internode between corolla and androecium are found to be elongated and is known as androphore, example, Passiflora.  Sometimes, the region between the androecium and gynoecium is elongated and is known as gynophore, for example, Pterospermum.  In some flowers, the internodes between corolla and androecium (androphore) and between the androecium and gynoecium (gynophore) are elongated and they together constitute gynandrophore, for example, Gynandropsis.  The thalamus sometime elongates upwards into a slender axis and the carpel remains attached.  Such an axis is called carpophore for example, Impatiens and Coriandrum.

Relative position of the floral whorl on the thalamus:  On the basis of gynoecium and other floral whorls, the flowers may be:

Calyx is the first whorl of a flower and each individual of this whorl is called sepal.  They may be arranged in a regular, irregular or zygomorphic manner.  When the sepals are green in colour, they are described as sepaloid and when they are brightly coloured, they are called petaloid as in Caesalpinia.  The sepals may become scaly or hair-like, for example, Helianthu, Tagetes and such modified sepals are known as pappus.  They are persistent and help in the dispersal of fruits.  Sepals of trapa are modified into spines which act as a defence organ.  In case of Impatiens, the calyx is modified into a beak-like projection and in case of Mussaenda, one of the sepals become enlarged, leafy and showy to attract insects for pollination.

It is the second whorl inner to calyx.  The individual members of this whorl are called petals.  The petals are coloured and scented.  The petals protect the inner whorls and attract the insects for pollination.  Each petal has a narrow basal portion known as the claw and upper portion called the limb.  When the petals are free from one another, they are described as polypetalous.  When they are united with one another, they are known as gamopetalous.  In a gamopetalous corolla, the united basal portion is known as corolla tube and the upper free portions are known as corolla lobes.  The junction between the corolla tube and the lobes is called throat.  Tube-like appendages are developed from the corolla to store nector called spurs, for example, Impatiens.  In some cases, additional structures are developed from the throat of the corolla in the form of lobes, scales or hairs forming the corona, for example, Passiflora, Vinca etc.