A mature seed consists of two essential parts – the seed coat and the embryo.

The testa is usually thick and leathery while the tegmen is thin, papery and fused with the testa.  The seeds developing from the untegmic ovules (ovule with one integument) have single-layered seed coat.  The function of the seed coat is to protect the delicate embryo.

The seed remains attached to the pericarp by a short stalk called seed stalk or funiculus.  In a mature seed, the position of the seed stalk is represented by a small oval depression, called hilum.

Just below the hilum is a small pore, called the micropyle.  In some seeds, the stalk is continuous with the seed coat and the fused part appears as a small ridge just above the hilum.  This ridge is known as raphe.

Embryo:  Embryo may be defined as a young plant enclosed within the seed coat. The embryo of a mature seed consists of four distinct parts – cotyledon, plumule, hypocotyl and radicle.  The radicle, plumule, and hypocotyl together form the embroynic axis or tigellum.

The part of the embryonic axis lying immediately above the point of attachment of the cotyledons is known as epicotyl and at the tip of the epicotyl lies the plumule.

It gives a small feather-like appearance due to the presence of one or more leaf primordia at its apex.  The part of the embryonic axis below the point of attachment of the cotyledons is known as hypocotyl.  The radicle is the basal tip of the hypocotyl.  When seed germinates, the radicle becomes the primary root of the seedling.

Storage of food in the seed:

Absence of endosperm in the seeds indicates that the endosperm has been completely utilized by the developing embryo.  Such seeds are known as non-endospermic or exalbuminous.

Structures of some of the seeds:

The castor seed is relatively large and oblong.  The testa or the outer seed coat is hard, brittle and mottled.  The tegmen or inner seed coat is thin and is fused with the testa.

One of the characteristics features of the castor seed is the presence of a soft spongy outgrowth known as the caruncle at the micropylar region.  It absorbs water and helps in the germination of the seeds.  The hilum is almost hidden in the caruncle.  A distinct raphe extends from the hilum.

Inner to the seed coat is the white endosperm or albumen, forming most of the interior part of the seed.  It is the main food storage tissue of the seed.  The endosperm is rich in oil and the castor oil is extracted from these seeds.

The embryo is enclosed within the endosperm. The plumule is blunt and undifferentiated.  The hypocotyl and radicle are short and hidden in between the two cotyledons. 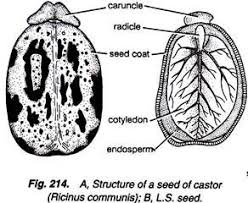 The gram seed is broader at one end and pointed at the other end.  It is covered with a brownish seed coat, made of two distinct layers – the testa and the tegmen.  The testa is thick and brownish whereas the tegmen is thin, whitish and fused with the testa.

The micropyle lies at the pointed end of the seed.  Above the micropyle is present a small depression representing the hilum.  The raphe extends beyond the hilum as a small ridge on the testa.  The embryo consists of two circular yellowish cotyledons.  Both the cotyledons are attached to the embryonic axis opposite to each other.

Corn is a one-seeded fruit, called caryopsis in which the fruit wall or the pericarp is fused with the seed coat.  The corn grain is a flat oblong structure.  It shows externally a large yellowish upper area which marks the position of endosperm and on the lower side, there is a small whitish area which contains the embryo.  Seed coat is not distinct and it is fused with the fruit wall or pericarp.  The micropyle and the hilum are also indistinguishable.

The embryo consists of a single cotyledon, the plumule and the radicle.  The shield-shaped cotyledon in the grain is known as scutellum.  It is a flat structure closely pressed against the endosperm.  The scutellum absorbs food from the endosperm and transfers it to the growing parts of the embryo. 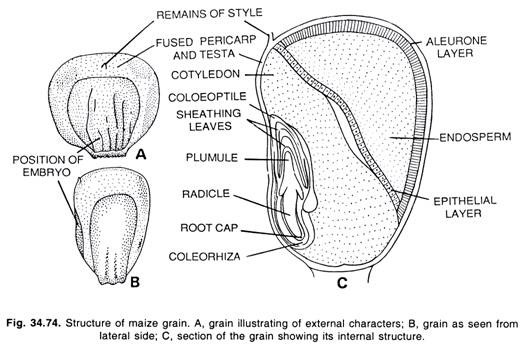