The ovule is a multicellular oval-shaped structure which originates from the placenta and lies inside the chamber of the ovary.  Each chamber may consist of one or more number of ovules.  A fully mature ovule consists of the stalk or funicle and the body.  One end of the funicle is attached to the placenta and the other end to the body of the ovule.  The point of attachment of the funicle with the body is called hilum.  Funicle sometimes extends up to the base of the ovule and the ridge thus formed is called raphe.

The body of the ovule shows two ends – the basal end often called, the chalaza and the upper end, known as the micropylar end.  The main body of the ovule is covered with one or two envelops called the integument.  In some cases, however, there may be a single layer of integument.  Accordingly, the ovules are referred to as unitegmic or bitegmic.  The integument gives protection to the internal tissues.

There is a small opening at the apex of the integument called the micropyle.  The integument encloses a large parenchymatous tissue known as nucellus.  In center of the nucellus is situated the female gametophyte known as embryo-sac which develops from a functional megaspore.  The embryo sac bears the embryo and is the most important part of the ovule. 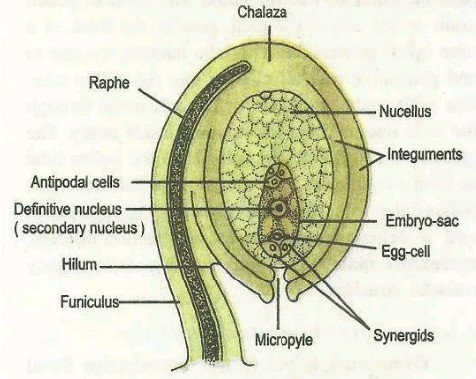 Structure of ovule:  L.S. of a typical ovule

The embryo sac is the female gametophyte.  It is oval in shape and lies within the nucellus of the ovule.  A mature embryo sac consists of a group of three cells at each of its ends, lying on either side of a big centrally placed nucleus.  These cells are thin- walled.  The group of three cells lying towards the micropylar end is called the egg-apparatus.  The central cell of the egg-apparatus is known as the egg cell or ovum.  It forms the female gamete.  The other two cells, one on each side of the egg cell are called the synergids.  The egg cell after fusion with the male gamete, i.e, after fertilization, gives rise to the embryo.  The synergids are nonfunctional, short-lived and disintegrate soon after the fertilization.

The group of three cells at the chalazal end and lying opposite to the egg-apparatus are called the antipodal cells.  The antipodal cells have no definite function and they disintegrate after the fertilization of the ovum.  The large nucleus lying somewhat at the center of the embryo sac is called the definitive nucleus.  It is the fused product of the two polar nuclei, contributed one each from the two poles or ends of the embryo- sac.  The definitive nucleus fuses with one of the male gametes to form the endosperm nucleus, which later grows into the endosperm of the seed.

Development of the embryo sac:  The embryo sac develops from a single cell of the hypodermal layer of the nucleus.  This cell is called the embryo–sac mother cell or megaspore mother cell.  It divides twice to produce a row of four embryo- sac cells or megaspores.  The upper three cells degenerate and form dark patches or caps, while the lowermost cell becomes functional.  It enlarges to form the embryo sac.  The nucleus of the embryo sac divides thrice to give rise to eight nuclei, four at each end or pole.  One nucleus from each pole migrates to the center of the embryo- sac.  These are called the polar nuclei, which fuse together to give rise to definitive nucleus or fusion nucleus.  The other six nuclei three at each pole enclose themselves by their walls and form the egg-apparatus and antipodal cells.

The different types of ovules are as follows: