Fleshy or succulent fruits are simple fruits having one or many chambers.  The pericarp is either juicy or fleshy and is usually differentiated into three layers – epicarp, mesocarp and endocarp.  Fleshy fruits are of the following types:

Drupe: This is a simple fleshy, one or many-seeded fruit developed from a superior, monocarpellary or polycarpellary ovary.  The pericarp is differentiated into the outer skin or epicarp, the middle fleshy or fibrous mesocarp and the inner hard and stony endocarp.

Berry: This is a simple fleshy, usually many-seeded but rarely one-seeded fruit developed from a superior or inferior syncarpous ovary with parietal placentation.  In a matured fruit, the seeds separate from the placentae and remain free in the pulpy mesocarp.

The pericarp is differentiated into the outer thin epicarp, the pulpy mesocarp and the fleshy endocarp, example brinjal, tomato, guava, banana etc.Fruits like vitis, date palm etc., are called one-seeded berry.  The berry is also known as bacca.

Pepo: This is a fleshy many-seeded fruit like berry,but develops from an inferior, one-celled ovary or from a superior three-celled syncarpous ovary.  The placentation is usually parietal.

The seed remains attached to the placentae and lie embedded in the pulp.  The pericap is thin and skin-like, the mesocarp and endocarp are fleshy and juicy, example bottle gourd, Cucumis, Cucurbita maxima, Momordica charantia etc.

Pome: This is a fleshy fruit, developed from an inferior, unilocular or bilocular syncarpous ovary.  The fruit is covered by a fleshy thalamus, which is the edible part, example apple, pear etc.

Hesperidium: This is a fleshy fruit, developed from a superior polycarpellary syncarpous, multilocular ovary with axile placentation.  It is a special type of berry where the epicarp is thick and leathery and is provided with oil glands.  The mesocarp is fibrous and fused with the epicarp.  The endocarp consists of many chambers with juicy glands, example lemon orange etc.

Amphisarca: This is a fleshy and many-seeded fruit developed from a superior syncarpous ovary.  The epicarp of the fruit is hard and woody forming the outer covering.  The mesocarp and endocarp are undifferentiated and together form the pulpy mass, example, Aegle.

Balausta: This is a fleshy and many-seeded fruit developed from an inferior syncarpous multilocular ovary.  The epicarp forms the hard covering or rind.  The mesocarp forms a paper membrane covering the seeds.

The endocarp is hard, plant-like structure on which the seeds are borne.  The seeds are irregularly distributed or are grouped at the center, example, pomegranate. 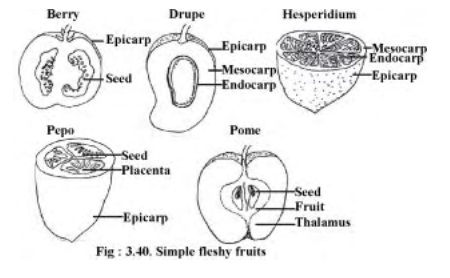 An aggregate fruit is a collection of simple fruits or fruitlets.  It is developed from an apocarpous pistil in which each carpel of the ovary develops into a simple fruit.

Thus, from a single flower as many fruits are formed as there are carpels.  The aggregation of such fruits is called an etaerio.  The etaerio may be of the following types:

Etaerio of follicles: This fruit is an aggregate of follicles developed from a polycarpellary and apocarpous pistil, example, Calotropis, Vinca rosea, Michelia etc.

Etaerio of berries: This is an aggregate of berries developed from a polycarpellary apocarpous pistil.  A number of berries lie embedded in the fleshy thalamus of the flower and it gives an appearance of a single fruit, example, custard apple.

These fruits are developed from the whole inflorescence, where the flowers are closely placed and often fused with each other.  Composite fruits are mainly of the following types:

Syconus: This fruit is developed from the hypanthodium inflorescence, which consists of a flask-shaped hollow and fleshy receptacle enclosing a large number of small flowers.

Sorosis: This is a fleshy, composite fruit developing either from a spike or spadix or catkin inflorescence.  The central axis of the inflorescence becomes thick, fleshy or woody on which flowers are borne compactly.  These flowers are fused together by their succulent sepals.

On maturity when the female flowers bear fruits, the whole inflorescence along with the central axis becomes fleshy and forms a composite fruit, example, Ananas, Artocarpus etc.  In case of mulberry, however, the central axis is not very much thickened, and the fleshy portion is formed by the loosely attached sepals.  Here, the fruit develops from a catkin. 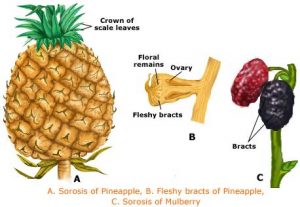