Weak stems undergo modifications for the purpose of vegetative propagation.  They have been classified into the following forms:

When the older portion of the stem dies or gets detached from the mother plant accidentally, the lateral branch developed from the node grows as an independent plant.  This process is called vegetative propagation.  Examples – Cynodon, Oxalis, Evolvulus.

It is very similar to a runner, in this case the internodes of the stem are curved and are slightly raised above the soil surface.  The nodes touch the ground and strike adventitious roots which enter into the soil.  Thus, each internode gives the appearance of a bow.  Each node produces a bud, giving rise to a lateral branch, which can grow independently into a new plant.  Example, is Hydrocotyle.

It is a short and stout horizontal branch.  It grows horizontally and after a short distance, the apex turns up.  The apex bears a tuft of leaves above and a cluster of roots below.  When the horizontal branch breaks up, it develops as an independent plant.  Example, Pistia.

This is a short runner like lateral branch, which grows obliquely upward from underground part of the stem.  It bears small scale leaves and produces roots at the nodal region.

Short, erect branches are developed from the nodes of the suckers, which penetrate the soil and come outside.  They bear green leaves and become aerial branches.  When the branch of the sucker breaks and separates from the mother plant, it gives rise to an independent plant.  Examples are Mentha, Musa etc. 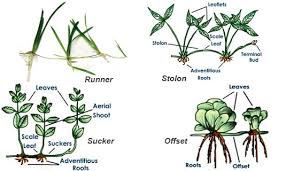 Underground stems are modified to serve the specialized functions like perennation, storage of food material and vegetative propagation.  They have been classified into the following forms.

This is an underground stem with distinct nodes and internodes.  Scale leaves are present at the nodes.  Lateral buds are developed in the axil of these scale leaves.  Adventitious roots are produced at interval from the nodal region.  It is usually branched and grows horizontally under the surface of the soil.

Mostly the terminal buds and sometime the lateral buds grow as aerial shoot.  The rhizome is an efficient storage for food material.  It can propagate vegetatively and can also perennate under favourable conditions, especially during the drought condition.  Examples, ginger, turmeric.

This is an underground modified stem like the rhizome, but it grows vertically.  It is unbranched, condensed and fleshy.  The shape is almost round or somewhat flattened from apex to the base.  The nodal region can be traced by the presence of scale leaves and axillary buds.  Roots are developed mostly from the basal portion and sometimes from the sides of the stem.

The corm contains heavy deposits of food materials.  It can propagate vegetatively by the production of axillary buds and can undergo perennation during the unfavourable periods.  Example; Gladiolus.

It is a modified underground branch developed from the axil of a leaf on the main stem which is under the soil.  The branch comes out as a slender root like structure and grows horizontally to some distance and finally becomes swollen at the tip, due to storage of reserve food materials.

The swollen portion more or less becomes round and spherical and is known as tuber.  It bears a number of depressed regions called “eyes.”  The elevated portion close to an eye is the node.  Scale leaves are found at the node and at the axil of each scale leaf, a dormant bud is developed.

Under favourable condition, this bud grows into a shoot.  The tuber does not develop any adventitious roots.  But when the bud develops into a shoot, roots are produced from its basal region.  Tuber also undergoes perennation during unfavourable periods.  Example is potato.

The bulb is represented by a condensed shoot.  The stem looks like a small cone or disc.  It develops a bunch of adventitious roots from its basal portion.  The disc is surrounded in concentric manner by a number of fleshy scales which are the modified leaves.  The fleshy scales are covered with a few dried scales.  This type of arrangement is called tunic and the bulb where tunic is present is known as tunicated bulb.  Examples are onion, garlic.

When the fleshy scales overlap each other, the bulb is said to be a scaly bulb as in Lilium.  In case of bulb, the terminal bud is developed at the apex of the cone or disc and lateral buds are developed in the axil of the fleshy leaves.

Modified aerial stems have been classified into the following forms:

This is a green flattened or cylindrical stem with nodes and internodes.  The leaves are modified into either scales or spines or as in some cases, the leaves may falls off after a short period.

The phylloclade is usually developed in plants growing in dry environmental condition.  Therefore, the leaves are reduced to minimise the surface of evaporation of water and the stem serves the function of the leaves particularly photosynthesis.

The stem also functions as a storage organ, as it retains water and mucilage, it develops a thick cuticle to check evaporation of water.  In case of Cocoloba, the phylloclade shows distinct nodes and internodes whereas in case of Opuntia, these are more or less indistinct.

This is a phylloclade consisting of only one internode.  The stem is green or cylindrical or sometimes flattened branch of limited growth, developed from the axil of the scale leaf as in Asparagus.

Tendril is a thin thread-like coiled structures developed mostly in case of climbers.  It is developed due to the modification of the axillary bud as in Passiflora or the terminal bud as in Vitis.

In some cases, the terminal portion of the flower bearing branch is modified into a tendril, which becomes branched and possesses nodes and internodes as in Antigonon.  The tendril coils round the support and help the plant to climb on it.

When it is detached from the plant, it gives rise to a new plant under favourable condition.  It usually produces one or more aerial shoot, which derive nourishment from the bulbil for some time and then produces the roots which enter into the soil.  Example; Dioscorea. 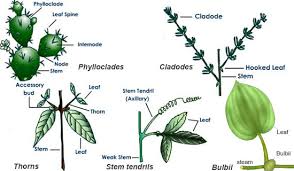