Water is absorbed in plant through roots but under certain conditions, water is absorbed by shoot also.  Some plants also absorb water through their leaves.  The leaves of coast redwood (Sequoia sempervirens) absorb water from the fog in which they are frequently bathed along the California coast.  Certain epiphytes, for example, orchids, absorb moisture from the atmosphere by their special modified hanging roots.  The maximum absorption occurs in the region of root hairs where xylem is not fully matured and the epiblema and endodermis are permeable.

Root hairs are the main water-absorbing organ of plants.  They develop in the region of maturation and their number varies from plant to plant.  A root hair is the unicellular tubular projection or prolongation of outer wall of epiblema.  Cell wall of root hair is composed of two distinct layers.  Outer layer is composed of pectin and the inner layer is made up of cellulose.  Both the layers are hydrophilic in nature.  Cell wall is permeable to both solute and solvent.  The cell wall surrounds plasma membrane and thin layer of cytoplasm.  Plasma membrane along with cytoplasm acts as selectively permeable membrane. The cytoplasm encloses a central vacuole that contains cell sap.  Nucleus of the cell is generally present at the tip. 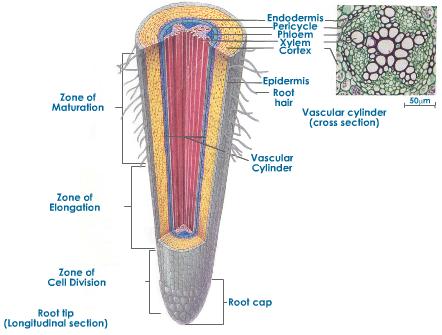 The apoplast is discontinuous and is separated into two regions.

The symplast forms a continuous system because the protoplast of the cortex, endodermis and vascular tissue are connected from cell to cell through cytoplasmic strands, called plasmodesmata.  Flow of water through cortex involves both the pathways.

When the water is absorbed due to the activity of root itself, particularly root hairs, it is called active absorption.  It may be osmotic or non osmotic.

At first, water gets imbibed on the outer cell wall surface.  As the cell wall is permeable, it allows both the solute and solvent to pass through it.  Water enters through the cell wall and comes in contact with plasma membrane.  Plasma membrane, a thin film of cytoplasm and tonoplast together act as selectively permeable.

Water moves from root hair cells to cortical cells along concentration gradient and finally reaches up to pericycle and endodermis.  Since the xylem elements have no turgor pressure, their diffusion pressure deficit is higher than that of the surrounding cells, as a result of which water enters into the xylem.  This theory involves simplest movement of water, i.e., the water enters into living protoplasm of cells and then moves into the living protoplasm of another cell.

It has been observed that absorption of water takes place even if the concentration of cell sap in the root hair is lower than that of the soil water.  Normally under such conditions, the water molecules should diffuse out from root hairs into external solution due to exosmosis.  But still, water is absorbed against the concentration gradient, i.e., from higher diffusion pressure deficit to lower diffusion pressure deficit.  This type of absorption takes place at the expense of energy.  According to some physiologists, the energy is supplied by cellular respiration.  Thus, non osmotic absorption requires metabolic energy, which comes from respiring cells of the root.  Following are certain evidences which show a definite correlation between respiration and absorption: