The pyruvic acid formed during glycolysis enters mitochondria where it is further oxidised.  Following two steps of aerobic oxidation occur within mitochondria.

FORMATION OF ACETYL COENZYME A

Pyruvic acid molecules produced during glycolysis move into mitochondria and all reactions of cellular respiration take place within these tiny power houses.  Here each three carbon molecule of pyruvic acid is decarboxylated and dehydrogenated.  Due to release of carbon dioxide,3 carbon molecule of pyruvic acid is converted to a 2 carbon acetyl group which reacts with a large complex enzyme, called coenzyme A.  This results in the formation of a compound called, Acetyl coenzyme A (CoA).  This process requires five cofactors namely, magnesium (mg++) thiamine pyrophosphate (TPP), NAD, coenzyme A and lipoic acid.  The overall reaction of conversion pyruvic acid into Acetyl coenzyme A can be written as:

The reactions of these cycles were worked out by Sir. Hans Krebs, hence, the name Krebs cycle.  The important  steps of Krebs cycle are as follows:

Oxaloacetic acid picks up another molecule of activated acetate to repeat the cycle.  A molecule of glucose yields two molecules of NADH2, 2 ATP and 2 pyruvate while undergoing glycolysis.  The 2 molecules of pyruvate are completely degraded in Krebs cycle to form 2 molecules of ATP, 8 NADH2 and 2 FADH2.

NADH-Q has 2 prosthetic groups, flavin mononucleotide (FMN) and iron sulfur (Fe-S) complexes.  Both electrons and protons pass from NADH2 to FMN.and the latter is reduced.  However, FMNH2 breaks to release protons and electrons.  Protons are passed out through the inner mitochondrial membrane to outer chamber.

Electrons now move to the iron sulfur complex (Fe-S) and from there, to quinone   The common quinone is coenzyme Q, also called ubiquinone (UQ).

Charged quinone picks the proton from mitochondrial matrix and passes it into the outer chamber with the help of cytochrome b.

FADH2 produced during the reduction of succinate passes its electrons and protons to coenzyme Q through iron sulfur complex (Fe-S).  The enzyme is succinate Q reductase complex.

Cytochrome c1 hands over its electron to cytochrome c.   Like Coenzyme Q, cytochrome c is also mobile carrier of electrons.

Cytochrome c oxidase complex contains cytochrome a and cytochrome a3 .Cytochrome a3 also possess 2 copper centres, which helps in the transfer of electrons to oxygen.  Oxygen is the ultimate acceptor of electrons.  It becomes reactive and combines with protons to form metabolic water. 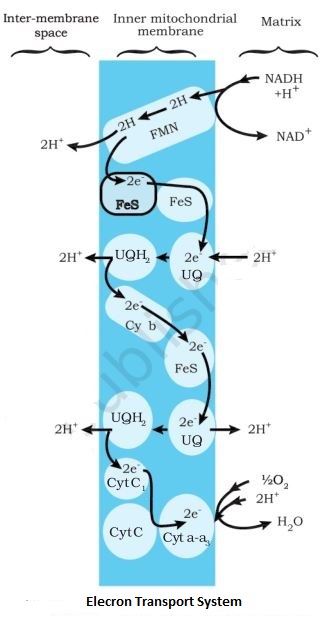