DNA fingerprinting also termed as DNA profiling, is a method of isolating and identifying variable elements within the base pair sequence of DNA. It is useful in identifying individuals particularly in forensic sciences. It is helpful in establishing a link between biological evidence and a suspect.

It involves a process termed as Southern blotting. The credit goes to E.M. Southern for its discovery. A very small sample of DNA is sufficient for the test. The sample includes blood, semen, urine, hair follicles, etc.

Following are some of the major steps of DNA fingerprinting technique : 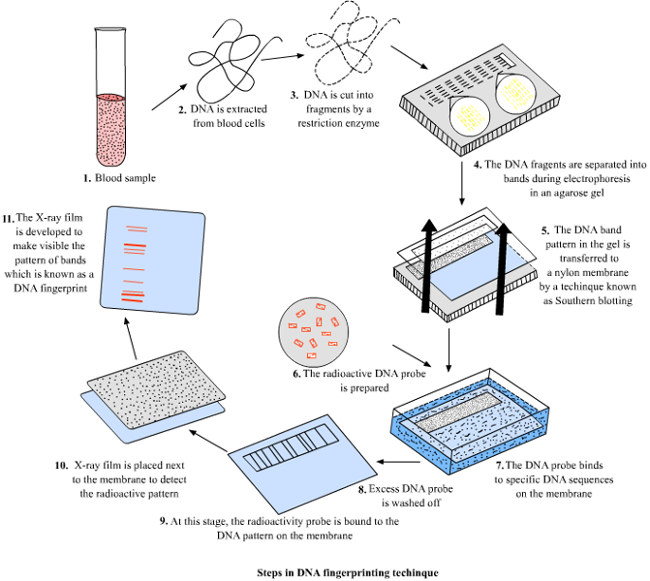 All DNA testing is based on the observation that the genome of each person or animal is unique (except identical twins). DNA polymorphism is the result of mutations or variations. Mutations can occur in the somatic (vegetative) as well as in reproductive (germ) cells. The somatic mutations do not transmit from parents to the offspring. The germinal mutations those occurring in reproductive cells  often transfer to the offsprings through the gametes. Individuals of future generations thus produced carry these mutations.

The differences in nucleotide sequence among individuals are DNA polymorphisms.

The eukaryotic genome has large number of short sequences that repeats over and over in small to large arrays termed as minisatellites and microsatellites. Another term commonly used to describe these sequences is variable number tandem repeats or VNTRs.

Single base changes in DNA often introduce or obliterate a restriction enzyme site. For example, a mutation that changes the sequence AGATCC to GGATCC will introduce a Bam H1 site into that segment of DNA. Such sequence variability is exceedingly common particularly in non coding regions of the DNA and determining whether or not a particular group of restriction sites  exists in DNA is a very sensitive means of differentiation one individual from many others.