DNA replication is the process of producing two identical replicas of DNA from one original DNA molecule. It is the master molecule that controls activities of the cell.

1. Autocatalytic i.e., DNA synthesizes another DNA molecule similar to it. This is also termed as DNA replication. One of the two strands of DNA functions as its own template and hence replication is semiconservative.

2. Heterocatalytic i.e, DNA also directs the synthesis of protein molecules dissimilar in structure compared to its own structure. This process is brought about through a special mechanism involving different types of RNA. This process is termed as protein synthesis.

The Watson Crick model of DNA suggests that the two strands of DNA should separate. Each separated stand also termed as parent strand now serves as a template for the formation of a new but complementary strand.

Following are the various enzymes which play important role in DNA replication.

These are helpful for initiation or unwinding of DNA. These relax and disentangle DNA coils and super coils.

These are helpful in unwinding the original double helix after the removal of supercoils by topoisomerases. These enzymes are helpful in breaking the hydrogen bonds between the two DNA strands.

Once the DNA helix opens, single strands  bind to these proteins. Thus, preventing DNA from reforming the duplex.

DNA polymerase III in E. coli and DNA polymerase ε in eukaryotes are directly involved in the replication of nuclear DNA. DNA polymerases can synthesize DNA only in 5’→ 3′ direction meaning thereby that the new nucleotide always adds to 3′ hydroxyl end of the growing DNA chain.

Many prokaryotic and eukaryotic DNA polymerases also possess 3′ → 5′ exonuclease activity. This causes the removal of nucleotides from 3′ end of the polynucleotide chain to correct the occasional errors in base pairing (also termed as proofreading).

In E. coli DNA polymerase 1 acts as exonuclease and helps in removal of RNA primers of the lagging strand. DNA polymerases, however, cannot start the formation of new DNA strand from free nucleotides and therefore need a primer.

Primer is a short piece of RNA required for free 3′ hydroxyl group. This piece is synthesized by primase in E. coli and DNA polymerase alpha in eukaryotes.

This enzyme joins the bits of DNA by forming phosphodiester bond between 3′ hydroxyl and 5′ phosphate group.

Enzyme helicase, which is also termed as rep protein is useful in the unwinding of the helix. This unwinding may result in formation of supercoils. The action of another enzyme, termed as DNA gyrase (topoisomerases) is helpful in the removal of the supercoils.

A new strand is now synthesized opposite the parental strand that acts as a template strand. DNA polymerase III is the true replicase in E.coli but is incapable of initiating DNA synthesis ,i.e., it is unable to deposit the first nucleotide in a daughter strand. Hence another enzyme, termed as primase initiates the synthesis by producing a short primer strand of RNA. The process requires some other enzymes. These are collectively termed as primasomes. The primer strand then elongates. Once the initiation of DNA synthesis completes, removal of this primer RNA strand occurs .

After the formation of primer strand, DNA replication occurs in 5’→ 3′ direction, i.e., deoxyribonucleotides adds only to the 3’OH end of the new stand. During this process, for example, deoxyadenosine triphosphate (dATP) adds to an elongating DNA strand opposite thymine base in template strand. This is brought about by enzyme DNA replicase (DNA polymerase). The phosphate of dATP forms a 3’→5′, phosphodiester bond with free 3’OH of the elongating strand releasing a molecule of pyrophosphate simultaneously. Thus the nucleotide at 3′ carbon of sugar is always the most recently added nucleotide to the chain.

Thus, two DNA molecules form from one molecule. Each of these daughter DNA molecules consists of two strands of which one is old (parental that acts as a template) and other one is new. 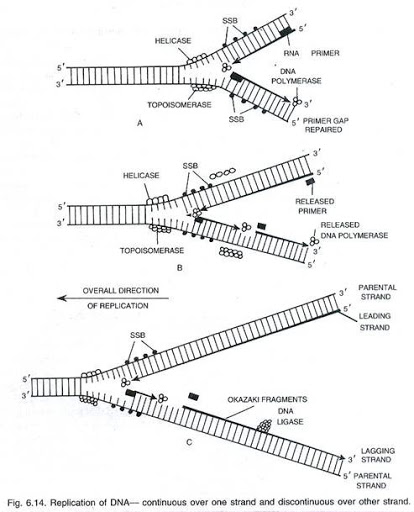