Hydrophytes are the plants which grow in habitats where water is abundant. They are further divided into the following six groups. 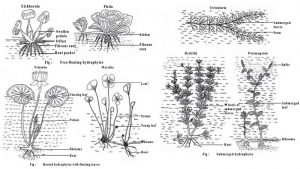 Hydrophytes have some special adaptations.  Following are some of the external features.

In hydrophytes roots do not play an important role in water absorption.

The stem of hydrophytes shows the following adaptations.

The petioles have special modifications to suit the aquatic environment.  Following are some of the modifications.

The leaves of hydrophytes show the following characteristics:

Following anatomical characters are common to all hydrophytes.

Epiblema is not cuticularised.  Cortex is mostly parenchymatous.  Aerenchyma may also be present.  Xylem is poorly developed in comparison to phloem.  Amphibious hydrophytes show xerophytic characters in addition to hydrophytic characters.  The roots of these plants have well developed mechanical and vascular tissues, besides aerenchyma.

Cuticle is absent in epidermis.  Cortex is large and parenchymatous.  It is largely made of aerenchyma.  Xylem is poorly developed in comparison to phloem.  The vascular tissues are so reduced that these form a single vascular bundle.

Transverse section of the root shows the following characters:

Transverse section of the stem shows the following characters:

b).  Absence of cuticle.

c).  Presence of air chambers in the cortex.

e).  The amount of phloem is more than that of xylem. 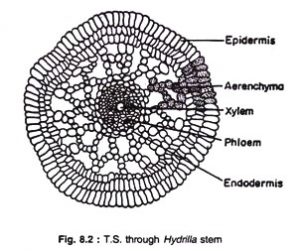 Transverse section of the petiole shows the following characters:

b).  Absence of cuticle.

e).  The phloem is distinct in comparision to xylem. 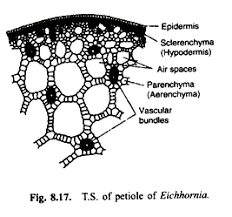 Fig: T.S. of petiole of Eichhornia