Ecological niche is a most inclusive term that involves not only a physical space occupied by organism but its functional role in the community and its position in the environmental gradients including other conditions of existence. Ecologist Grinnell used the term niche for the first time to explain micro habitat.  Roswell Hill Johnson coined the term niche.

The three aspects of ecological niche:

There are three aspects of ecological niche; Spatial or habitat, trophic niche (the functional role for the trophic position), multidimensional or hypervolume niche (position in the environmental gradient).

Kendeigh (1974) considered the niche as a combination of habitat and biotic interactions of a species for its survival and continuance in a community; for example, in a pond a variety of fish live but they may differ in their food habitat (i.e., they may be herbivores or carnivores) or they may differ in the distribution pattern like surface column or bottom dwellers according to their feeding habit. There may be other kinds of distribution depending upon environmental gradients, such as temperature or pH.

Likewise the lake is also the habitat of many species of phytoplanktons but their distribution will vary depending upon the differential requirements of ecological factors such as nutrients, temperature, silica concentration, availability of light and so on. So, niche in the broad sense includes abiotic and biotic variables and their interaction with organisms. In this case it is termed as multidimensional niche.

It broadly means a physical space occupied by an organism. It relates to the concept of habitat.  But differs from it, in the sense that while different species may occupy the same habitat, the activity of each organism may actually confine to a small portion of habitat termed as microhabitat.

O’Neill (1967) found seven species of millipedes in a maple forest. All species broadly occurred in the same habitat and were detritivores . Thus they belong to the same trophic level. But detailed study revealed that each species dominated in its own specific microhabitat which was different from the others. There were several gradients in the decomposition stage from the centre of the log to the bottom of the leaf litter. These gradients were identified as distinct micro habitats, although the general habitat was the forest floor.

Trophic niche refers to the trophic position (i.e., food level of an organism). For example in the Galapagos Island in South America birds belonging to 3 genera namely, Geospiza (ground finches),Camarhynchus (i.e., tree finches) and Certhidea (warbler finches) are found. All these birds live in the same general habitat but differ in their trophic position. One of the tree finches has a parrot like beak and feeds on birds and fruits. The other three finches are carnivorous and feed on insects of different sizes. The ground finches are seed eaters. The beaks of different species vary according to the type of seeds they eat.

Another example is of the two aquatic bugs, Notonecta and Corixa. Both live in the same pond but occupy different trophic niches. Notonecta is a predator while Corixa is a detritivore (feeds on dead tissues).

For example, if we take temperature and relative humidity separately and independently on a particular population. Then the population niche will be a two dimensional box. But as these two factors are not independent of each other, the interaction is better represented as an ellipse.

If  we consider another variable such as availability of nutrient . These factors will then be affected by the interaction of temperature and relative humidity. The niche will show three variables or a three dimensional figure.

A large number of abiotic and biotic factors affect the functioning of a population. Therefore, the niche is a multidimensional hypervolume. This concept was developed by G. Evelyn Hutchinson of Yale University.

Most niche measurements involve plotting along at least two axis. The resulting graphs covers a certain area along an axis termed as the niche width. A species with the large niche width is a generalised species (niche showing wide variability).  Species with the narrow niche is more specialised and can form an indicator species for a particular environmental condition.

Hutchinson recognised two types of niches; fundamental niche and realised  niche. Fundamental niche of a species is the hypervolume that a population can fill in the absence of competitors. So each species has a fundamental niche within a community.  But because of competition, due to similar requirement along the niche dimension, the competitor niches will overlap one another. As a result of these biotic constraints, only a part of the niche is realised by the species. These smaller hyper volume occupied by a species is termed as the realised niche. 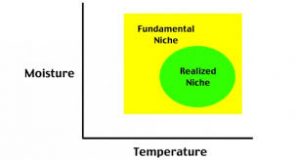 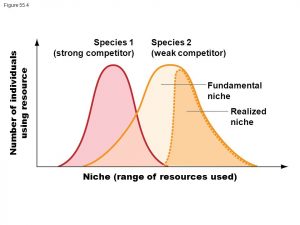 For example; a grassland ecosystem develops wherever there is a climate conducive to such development. But the grass and the herbivorous species may vary from one grassland to another. The kangaroos of the Australian grasslands perform the same function as the bisons and Pronghorn antelopes of North American grasslands. Therefore they are termed as ecological equivalents.