It is a graphic representation of the number of individuals per unit area of various trophic levels stepwise with producers  at the base and top carnivores kept at the tip.

Pyramid of number in terrestrial and aquatic ecosystem

In pond ecosystem also, the number of organisms decreases gradually from the first trophic level to the last trophic level.  Thus, the pyramid of number in pond ecosystem too is upright or straight.  In forest ecosystem, the shape of pyramid is rhomboidal.  A single large tree represents the producers.  Many food-eating birds, herbivores animal depend on this tree.  Thus, number of primary consumers is more than the number of producers.  Thereafter, the number of secondary and tertiary consumers decrease progressively. 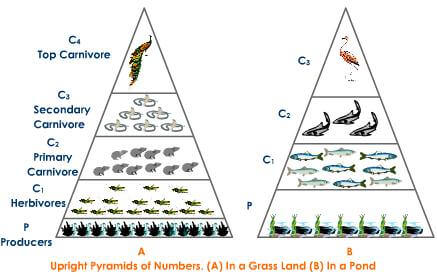 Ecological pyramid (Pyramid of Numbers in grassland and pond ecosystem)

The amount of living or organic matter present in an organism is termed as biomass.  Biomass is the total mass of organisms.  It can be estimated in terms of wet mass, dry mass, or ash-free dry weight.  The biomass at the time of sampling is termed as standing biomass or standing crop biomass.

Pyramid of biomass is a graphic representation of biomass present sequence-wise per unit area of different trophic levels with producers at the base and top carnivores kept at the tip.

Pyramid of biomass is more real than the pyramid of numbers.  It is because the pyramid of numbers does not take into consideration the size of the individual.  For example, mouse, shrew, squirrel, rabbit, deer, antelope, bison and elephant are all herbivores.  The same amount of vegetation will support a large number of mice, fewer rabbits, still smaller number of deer and very few elephants.  However, their total biomass shall be equal and will relate to the biomass of the vegetation as well.  Maximum biomass occurs in producers.  There is a progressive reduction of biomass in herbivores, primary carnivores, secondary carnivores etc.

Pyramid of biomass in terrestrial and aquatic ecosystem 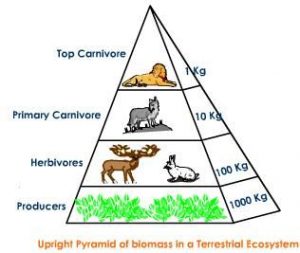 In aquatic habitats the biomass of a trophic level depends upon reproductive potential and longetivity of its members.  In pond, the number of producers (algae) is very large but their biomass is the least of all, being very small in size.  The amount of biomass continues to increase with primary, secondary and tertiary trophic levels.  Thus, the pyramid of biomass in pond ecosystem is inverted. 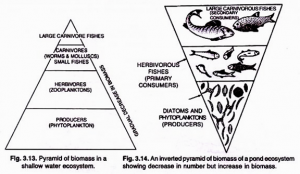 It is a graphic representation of amount of energy trapped per unit time and area in different trophic levels of a food chain with producers forming the base and top carnivores the tip.  This is the most ideal and fundamental way of representing, energy relationship between organisms and different trophic level.  The energy content is expressed as Kcal/m2/Yr or KJ/m2/Yr.  Maximum energy content is present in producers.

In every ecosystem, only producers have the capacity to use the energy from the sun and convert it to food system.  The energy converts in chemical form and gets stored inside the organic matter manufactured by the producers.  The energy in the form of food transfers from one trophic level to another.  Thus, the flow of energy is always unidirectional. 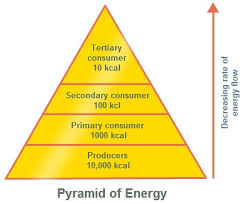 Pyramid of energy in terrestrial and aquatic ecosystem 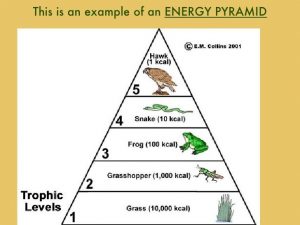