Ecological succession involves an orderly process of community changes, which are directional and hence predictable.  It involves the modification of the physical environment, culminating in the establishment of a stable community.

A sequence of temporary communities replace one another in a given site, thus bringing about changes in the physical environment, which in its turn determines the pattern of  succession. The transitional series of communities which develop in a given area are termed as sere or seral stages, while the final stable and mature community is termed as the climax.

Ecological succession is therefore community controlled although the environment determines the successional pattern.

Following are the characteristic features of ecological succession features:

Following are the three basic causes of succession:

This is a type of succession that occurs on a previously sterile area such as bare rocks, sand dunes etc.  Hardy species inhabit these areas. Such first group of organisms to establish in these areas where no living matter was present is termed pioneer, primary community or primary colonizers.  Lichens generally form pioneer community in barren rocky areas.

Water seeps in cracks in the rocks; it may freeze expand and break the rock into small pieces. The surface of rock weathers by the beating of wind and rain.  Carbonic acid forms when atmospheric carbon dioxide dissolves in water, helps to dissolve minerals in the rocks providing nutrients.  Dead lichens also contribute organic matter to the forming soil.  This community is followed by mosses which may gain a hold even in very thin layer of soil.  Mosses are followed by annual grasses, perennial herbs, shrubs and finally the trees. The forest and grasslands generally represent climax communities. 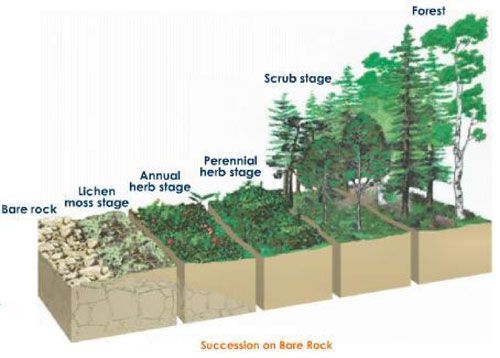 This type of succession occurs in an area where a community was existing earlier but has been destroyed mostly due to forest fire, floods, land, etc.  Only a few organisms and a considerable amount of organic matter remain in the area. The remaining species and those able to grow on organic matter form new pioneer community. 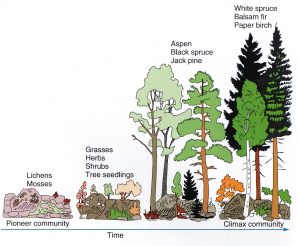 Every primary succession, irrespective of the bare area from which it starts, shows following five stages which follow one another:

Certain trends often can be made out during the course of succession. In the first place, community productivity goes up.  Secondly, biomass tends to increase because with succession the number of individuals in a community increases.  Finally, species diversity of all kinds usually increases for most of the course of the succession.  However, towards the end of the succession, diversity may decrease due to competitive dominance of a few or even one species.