Climate is the major part of environment. It includes aerial factors such as light, temperature, rainfall (precipitation), atmospheric humidity, atmospheric gases, wind, etc of an area at a particular time.

Light is the only external source of energy for the continuation of life of a plant.  It influences photosynthesis, opening and closing of stomata, plant movements, seed germination, flowering and vegetative growth like tuber, runner, stem and leaf formation.  These influences of light are due to its quality, intensity and duration.

The visible spectrum of sunlight (390-760 nm) consists of seven colours.  Of these, red and blue are more useful in photosynthesis.  On one side of the visible spectrum are ultraviolet rays (below 390 nm) which have low heating effect but more penetrating power.  These are injurious to protoplasm, growth and auxins.  On the other side of the spectrum are infrared radiation (more than 760 nm).  These have high heating effect and low penetration power, hence, increase the temperature.

The light intensity reaching different parts of the earth vary.  Short wave lengths are absorbed while light passes through the atmosphere.  Atmospheric vapours filter light rays and, therefore, intensity of light is more in dry regions than in wet regions.  The intensity of light reduces to about 4% when the day is cloudy or a thick fog is present.

Different types of plants grow in relation to light intensities at different levels.  Depending on the relative light requirement, plants have been placed in the following two groups.

b).  Sciophilous or shade-loving: These plants are best suited to diffuse or low light intensity(e.g., Hydrangea, Begonia etc).

The duration of light affects flowering and plants.  This is termed as photoperiodism.  Plants have been grouped into following three categories on the basis of their requirement of critical photoperiod.

a).  Short-day plants: These plants flower when the photoperiod (length of the day) received by them is less than the critical limit (e.g., tobacco, soybean, xanthium)

b).   Long-day plants: These plants require a photoperiod more than the critical limit of flowering (e.g., beetroot, radish).

c).  Day-neutral plants: Length of the day or photoperiod does not affect flowering in these plants  (e.g., cotton, sunflower, tomato etc.)

The major source of temperature is solar radiation.  The other sources include the heat radiating from earth and heat released during respiration of plants, animals and microbes.

A temperature that is most suitable for various life activities of an organism is termed as optimum temperature.  Vegetation has been placed into the following four classes on the basis of its relation to temperature.

a) Megatherms: This is a vegetation that grows in areas where temperature remains high throughout the year; e.g., dominant vegetation of tropical rain forest.

b) Mesotherms: This is a vegetation of an area where there is an alteration of low and high temperature seasons, e.g., vegetation of tropical decidoius forest.

d) Hekistotherms: The temperature of this region remains very low throughout the year, e.g., alpine vegetation.

Following are some of the effects of temperature on plants.

a). Sudden decrease in temperature causes the formation of ice-crystals in intercellular spaces. As a result water comes out of the cells and ultimately the plant dies due to drought and dessication.  The ice crystals also cause mechanical injury to the cells.

b). Temperature also stimulates the growth of seedlings.

d). Change in temperature affects the rate of photosynthesis.

e). The rate of respiration increases with increase in temperature.

Rainfall is a major ecological factor.  It affects both plant and animal life.  Following are some of the characteristics and influences of rainfall

The main source of water for the soil is precipitation or rain water.  Precipitation is in the form of clouds.  Rainfall, snowfall, sleet and hailstorms are the results of precipitation.  Rainfall and snowfall have a large effect on climatic conditions.  The water from rainfall flows into the rivers and lakes, percolates into the soil to form ground water and the remaining water evaporates.

Sea water as well as soil water evaporates due to heat of the sun.  The water vapours accumulate in the upper atmosphere where these cool down and get condensed to form clouds.  The clouds return water to the earth in the form of precipitation or rainfall.  This alternation of evaporation and precipitation of water is termed as hydrological cycle.

Following are some of the major influences of water.

a).  Water influences morphology and physiology of plants.

b).  Water affects all the vital functions of an organism.

c). The mineral in the soil gets dissolved and are then absorbed by plants. 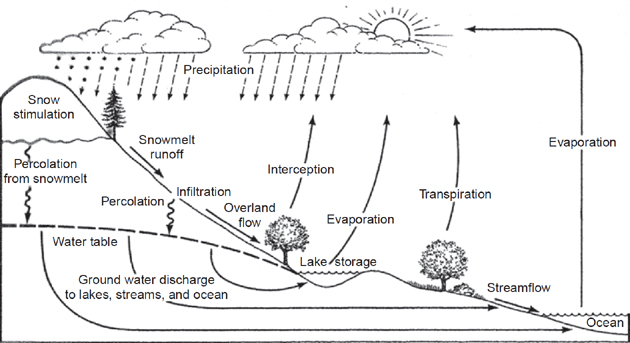 a) Specific humidity: This is the amount of water vapour present per unit weight of air.

b) Absolute humidity: This is the amount of water vapour present per unit volume of air at saturation.

c) Relative humidity: This is the amount of water vapour present actually in air and is expressed as percentage of the amount which the air can hold at saturation at the existing temperature.

Following are some of the major effects of humidity on plant life and climate.

a). Evaporation of water, its condensation and precipitation depends upon relative humidity.

b). Humidity affects structure, form, and transpiration in plants.

c).  Plans such as orchids, mosses and lichens depend on atmospheric humidity for the requirement of moisture.

The atmospheric gases have a great influence on vegetation.  The major gases known to occur in the atmosphere are carbon dioxide, nitrogen and oxygen.  These gases are continuously recycled through atmosphere, soil and organisms.  Beside these, oxides of nitrogen, oxides of sulphur, ammonia, methane, etc., released by microorganisms, automobiles, smokes, industries are also present in the atmosphere.

The amount of CO2 in the atmosphere is about 0.03%, but in the soil it is relatively more.  This is because CO2 is released by microorganisms and roots of higher plants during their respiration and since there is poor exchange of gases in the soil, it accumulates in the pore spaces.

Air has 15 to 20 times more CO2 in the night than in the day.  This is because plants use CO2 in photosynthesis during the day time.

The atmosphere contains 21% of oxygen.  This comes from the green plants which release oxygen during photosynthesis.  Oxygen is essential for all living organisms being necessary in respiration.

Wind is also one of the ecological factor which influences plant life.  Generally, regions closer to equator are hot.  Therefore, winds from cooler north and south poles continue to flow towards equator.  Following are common effects of wind on plants and environment.