Ecology is the study of living organisms with respect to their relation with environment.  The word “ecology” comes from two Greek words, oikos (house or dwelling place) and logos (study of).  It is, therefore, the study of an organism in its house or surroundings.  H. Reiter is given the credit of using the term ecology for the first time.  According to Earnest Hackel, it is the study of reciprocal relationships between organism and their environment.

The famous Indian ecologist, Professor R. Mishra of Benaras Hindu University defines ecology as interaction of form, functions, and factors.  Later, with the introduction of concept of ecosystem, the definition was modified.  Thus, Odum (1971) defines it as the study of structures and functions of ecosystem.  Two other terms equivalent to ecology are hexicology by Mivart (1894) and ethology by S.t Hilaire (1859).

It is subdivided into following groups depending on the level of studies:

Autecology:  An autecological investigation involves the study of all ecological factors related to a single plant or animal species throughout its life cycle.  The objective of the autoecological study is to describe ecological niche of the species in a very precise manner.  Such study is suitable for a locally available species which also has some economic importance.

Synecology:  A synecological investigation involves the study of biotic and abiotic elements associated with a natural community in a specific geographical area.  It includes the study of effects of environment on the plants and animals of the area.

The organisms inhabit different places on this earth.  Depending on the place or locality, following subdivisions are recognised – fresh water ecology, marine ecology, terrestrial ecology, space ecology and estuarian ecology.

System ecology: It deals with system interpretation of ecological concept and processes in terms of mathematical models and formulae.

Genecology: It is the study of genetic composition and changes in relation to the origin of ecads, ecotype, new species etc.

Applied ecology: It is a study of specialized fields of ecology which are concerned with conservation and economic exploitation of organisms, e.g., agronomic, agriculture, animal husbandry, forest life, wild life management, conservation  and pollution .

The effect of altitude is best shown by mountains.  With the increase in height, the temperature and atmospheric pressure decreases while the wind velocity, relative humidity and light intensity increases.  Thus, as the climatic conditions change with height, they also produce changes in the vegetational patterns.  Generally, the vegetation that develops on mountains from base to the top is tropical→temperate-like →taiga-like→ tundra-like→ polar-like.  Similar vegetation changes occur with changes in latitude, i.e., from equator towards the poles. 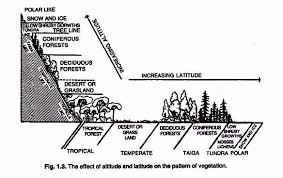 Fig : Effect of altitude on vegetation

The direction of slope is important in determining the rainfall and therefore, the type of vegetation in neighbouring area.  Clouds strike the mountains and then disperse in different directions.  This causes rainfall only in certain areas where there is rich vegetation.  In contrast, the other side of the mountains with low height, have scanty rainfall.  Thus xerophytic vegetation grow in these areas.

Fig: The effect of steepness of slope on vegetation

Study of ecology is important to maintain a balance between development and maintenance of natural environment and its biotic communities, use and conservation of resources, solve local and global environmental problems.

The complex environment that surrounds man influences his life, living, behaviour, style and almost every aspect.  Thus, he has to understand his surrounding to benefit himself the most without changing the environment.

It is now possible to understand the surrounding because various studies available from climatology, biochemistry, biophysics, microbiology, physiology, pedology, statistics etc., provide very useful information.  These informations have given explanations of interrelationships and interactions which occur around us.  It also helps in solving problems in human life, agriculture, socio economic strategy, wild life, forest etc.

Serious problems like soil erosion, flood management, pest control, pollution etc., occupy an important place in ecological studies.  The realisation of these problems is itself a great contribution of ecology.  Today, better understanding of the environment has led the present generation to plan better use of natural resources, making it helpful for the future generations.