The ecosystem comprises the biotic community and the non-living environment.  It is the basic functional unit as it includes both the organism and its environment, each influencing the properties of the other and both necessary for the survival and maintenance of life.  A.G.Tansley in 1935 coined the word ecosystem.  Some examples of natural ecosystems are ponds, lakes, oceans, grasslands, forests, deserts, tundras and so on.  An ecosystem be it a pond, forest, desert or tundra has the following two components; abiotic and biotic components.

The non-living environment (abiotic), such as the air, water, soil and the basic elements and compounds of the environment is one of the components of an ecosystem.  These non-living substances enter into the body of the living organisms, take part in metabolic activities and then return to the environment.  The abiotic portion of the ecosystem is conveniently divided into three parts:

a).  The climatic regime and physical factors like temperature, relative humidity etc.

b).  The inorganic substances such as water, carbon, nitrogen, sulphur, phosphorus and so on, which are involved in the cycling of materials in the ecosystem.

The biotic or living component of the ecosystem is divided into producers, consumers and decomposers.

Consumers are heterotrophic organisms, chiefly animals.  Depending upon their food habits, consumers may either be herbivores (plant eaters) or carnivores (flesh eaters).  Herbivores consume plants.  They may be insects, zoo-planktons or animals like deer, cattle, elephants etc.  Carnivores consume flesh and usually prey on herbivores and other carnivores.  The carnivore may be an insect like a praying mantis or a large animal like a tiger or lion.

The decomposers are also heterotrophic organisms but depend on dead organic matter for their food.  They are chiefly microorganisms like bacteria, actinomycetes and fungi.  These break down complex organic matter like cellulose, hemicellulose, chitin etc., found in the plant and animal body and ultimately release simple substances used by the producers.

Functional attributes of an ecosystem:

Ecosystems can be broadly classified into two types:

The examples of terrestrial and aquatic ecosystems are grassland and pond ecosystems, respectively.

A grassland ecosystem is characterized by the presence of herbaceous plant cover without trees.  A wide variety of grass species dominates it.  Along with the grasses, are present several herbaceous dicotyledenous species, especially of leguminous plants which play an important role in nitrogen economy.

All the organic and inorganic substances present in the soil are essential for the plant growth.  The elements such as C, H, O, N, P, S, K etc. are made available in the form of gases (CO2) or inorganic salts (e.g., nitrates, phosphates, sulphates etc.).  The biotic components include producers which are mainly grasses, such as species of Cynodon, Dicanthium, Digitaria, Setaria, Sporobolus etc.  Besides these, a few small shrubs are also present which increase the productivity.

As light passes down the waters of pond or lake, it is gradually absorbed and scattered.  The phytoplanktons near the surface of the water use this light for photosynthesis.  Here the colour of light becomes green, partly because the chlorophyll of algae selectively absorbs blue and red wavelengths.  Further down, there occurs a certain depth at which oxygen production by photosynthesis equals the respiratory consumption of oxygen by all organisms.  This is termed as compensation depth.

The Different Zones in a Lake

Zonation of lake according to light intensity has a profound influence in the distribution of organisms.  Shallow part of the euphotic zone termed as the littoral zone, contain various rooted aquatic plants such as Nymphaea, Trapa, Jussiaea, etc.  Aquatic life is richest in the littoral zone around the lake edges.  Here sunlight penetrates to the bottom and supports rooted aquatic plants.

Beneath the limnetic zone, the chief input of energy is dead organic matter that falls from above.  Various kinds of decomposers, fish and invertebrates consume this dead matter or one another.  At the bottom of lake, the decomposers use up dissolved oxygen as they convert dead organic matter back into inorganic nutrients.

Under the conditions of oxygen deficiency, the dominant decomposers are anaerobic bacteria.  In better oxygenated waters, the benthic region supports a variety of flat worms, protists and insect larvae.  Most of these can tolerate severe oxygen deficiency. 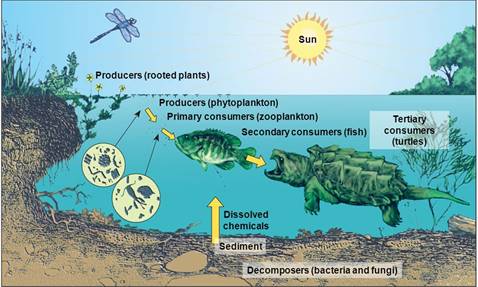