The factors which relate to structure and composition of soil is termed as edaphic factors.  Soil is a major ecological factor.  It is the surface layer of the earth, formed by weathering of rocks.  Plants depend on soil for nutrients, water supply and anchorage.  Soil is made of five components i.e.,  mineral matter, soil air, soil water, organic matter or humus and soil organisms.  The study of soil formation and structure is termed as pedology.

This is a process in which large rocks are broken into small pieces and finally into soil particles.  Weathering involves physical, chemical and biological reactions.  Physical reactions involve effect of water, gravity, glaciers.etc.  These reactions produce wetting and drying, heating and cooling and glaciations.  As a result, the rocks break into small pieces.

The important chemical reactions include hydration, hydrolysis, carbonation, chelation, etc.  As a result the soluble minerals separate and the rocks begin to break.

The biological breakdown is due to chelation which involves organisms like lichens and bacteria.  CO2 produced during the respiration of these organisms combines with water to produce carbonic acid which has chelating effects.  As a result the rocks slowly dissolve to form small pieces.

Organisms such as lichens, bacteria, fungi etc., grow in small soil particles formed by weathering.  These organism carry on their metabolic activities resulting in the formation of some organic acids, release of carbon dioxide and accumulation of organic matter due to death of organisms.  Mineralisation of dead organic matter releases inorganic substances in the soil.  Thus, a mixture of organic and inorganic substances, air, water and micro organism forms the soil.

This is the uppermost horizon made of organic matter. It may further be divided into two sub-layers.

a).  O1 region- This is the top most layer.  It consists of freshly added organic matter such as dead leaves, branches, flowers, fruits etc.

This horizon is present just below ”O” horizon. It is rich in mineral elements.  A large amount of humus, i.e., completely decomposed organic matter, is also present in this region.  It shows downward loss of soluble salts, clay, aluminium, iron etc.  Therefore, this region is also termed as zone of leaching or zone of eluviation.

This horizon is often dark in colour due to accumulation leached substances like clay , aluminium, iron etc.,  from horizon”A”. Therefore, this region is also termed as zone of accumulation or zone of illuviation.

Fig: Edaphic factors ( Zone of leaching and Zone of accumulation)

Horizons O, A and B are together known as top soil while horizons A and B constitute mineral soil or solum.

This is a layer of mineral substances. However, it consists of only rocks.  This horizon is also termed as sub-soil.

This is the lowermost layer. It is consists of bed rocks. 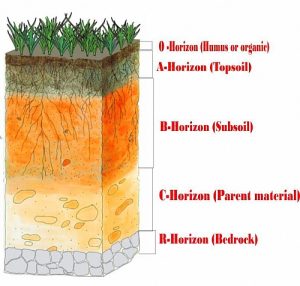 Sand particles are larger in size.  These have large pore spaces.  Most of the water quickly drains off and reaches deep into the soil.  As a result, roots spread and also reach a great depth.  The mixture of clay, silt and sand is termed as loam.  It is a fertile soil because it contains available nutrient elements in sufficient amounts.

The amount of water in the soil depends upon the size of the soil particles, their volume and aggregation.  The pore space between large sand particles is more and, therefore, water drains quickly.

The major source of water for the soil is rain water.  Most of this water flows and collect into rivers and lakes.  This is termed as run off water.  The remaining water gradually percolates deep into the soil and occurs in the following forms:

i).  Hygroscopic water:  This form of water occurs as a thin film around the soil particles.  As such hygroscopic water is not useful for the plants and is termed as unavailable water.

ii).  Capillary water:  This form of water is present in the thin and narrow capillaries formed between the soil particles.  This is the major source of water for the plants.  Thus it is termed as available water.

iii).  Gravitational water:  Some amount of water, percolates deep into the soil due to gravitational force.  This forms ground water or water table. 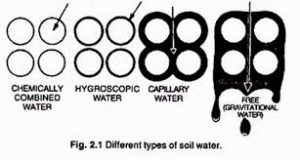 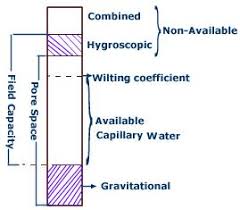 Soil water is generally a weak solution.  It contains almost all the mineral elements in sufficient quantities.  Plants absorb these mineral elements in the form of cations.  Therefore absorption of mineral elements depends upon cation exchange capacity of the soil.  Hydrogen (H+) and hydroxyl (OH–) ions determine the acidity and alkalinity of soils.  It is expressed in terms of pH.

Death of plants and animals result in the addition of organic substances.  The organic matter may occur in following three forms:

a).  Litter:  This is the fresh, dead organic matter, recently fallen to the ground.

b).  Duff:  This is partially decomposed organic matter derived from previous year’s or season’s litter.

c).  Humus: The microbial action results in the production of amorphous, dark in colour, completely decomposed organic matter termed as humus.  Plants obtain mineral elements from the soil and return them to the soil in the form of organic matter.  Microorganisms decompose the dead organic matter and nutrients are once again made available as inorganic elements.  This process is termed as  mineralization.

Soil has its own fauna and flora such as bacteria, fungi, actinomycetes, algae, protozoans, rotifers, nematodes, earthworms etc. Organisms such as bacteria and blue green algae fix atmospheric nitrogen and thus increase the soil fertility.  The activities of other soil organisms (e.g., earthworm) help in improving soil structure.