The passage of electrons from one enzyme or cytochrome to the next result in loss of energy at each step.  At each step, the electron carriers include flavins, iron sulfur complexes, quinones, and cytochromes. Quinones are highly mobile electron carrier.  Most of them are prosthetic group of proteins.

A prosthetic group is a non-protein molecule required for the activity of a protein. Prosthetic groups are organic or inorganic, non-peptide molecules bound to a protein that facilitate its function.  They also include coenzymes.

(i) NADH-Q reductase or NADH dehydrogenase complex (Complex I)

Complex I is also termed as NADH-Q reductase and the enzyme in complex I is NADH dehydrogenase.  It is a large protein, and also contains 45 amino acid chains.  NADH generates electrons in the mitochondrial matrix during the TCA cycle.  Oxidation of these electrons thus occurs by complex I termed as NADH-ubiquinone oxido-reductase or NADH-Q reductase.

In addition to several proteins, this complex also contains a tightly bound molecule of flavin mononucleotide (FMN) and also several nonheme iron- sulfur (Fe-S) complexes.  Both electrons and protons pass from NADH2 to FMN.  As a result the latter is reduced.  However, FMNH2 breaks to release protons (H+) and electrons.  As a result protons pass out through the inner mitochondrial membrane to outer chamber.

Electrons now move to the iron sulfur complex (Fe-S) and from there, to quinone.  The common quinone is coenzyme Q, also termed as ubiquinone (UQ).  It is highly soluble in lipids and thus diffuses freely in the plane of the membrane.  Thus ubiquinone (UQ) forms a pool of mobile electron acceptors that conveys electrons between complex I and complex III

Charged quinone picks the proton from mitochondrial matrix and thus passes it into the outer chamber with the help of cytochrome b.

Complex II is also termed as Succinate ubiquinone oxido-reductase or- Succinate Q-reductase complex. It contains flavin adenine dinucleotide (FAD).  Like Complex I, succinic dehydrogenase also transfers electrons from succinate to a molecule of ubiquinone from the membrane pool.

FADH2 produced during the reduction of succinate passes its electrons and protons to coenzyme Q through iron sulphur complex (Fe-S).

Cytochrome proteins also have a prosthetic group of heme.  The heme molecule is similar to the heme in hemoglobin, but it carries electrons, not oxygen.  As a result, the iron ion at its core is reduced and oxidised as it passes the electrons, fluctuating between different oxidation states: Fe++(reduced) and Fe +++(oxidised).  The heme molecules in the cytochromes have slightly different characteristics due to the effects of the different proteins binding them, giving slightly different characteristics to each complex.

Complex III in turn reduces a molecule of cytochrome c.  It is a peripheral protein located on the side of membrane facing the intermembrane space.  Like ubiquinone, cytochrome c is also a mobile carrier and conveys electrons between Complex III and Complex IV, the terminal complex in the chain.

The fourth complex also termed as Cytochrome c oxidase complex contains cytochrome proteins c, a and cytochrome a3. This complex also contains two heme groups (one in each of the two cytochromes, a and a3 . It also consist of three copper ions (a pair of CuA and one CuB in cytochrome a3), which helps in the transfer of electrons to oxygen.

Oxygen is the ultimate acceptor of electrons.  It becomes reactive and thus combines with protons to form metabolic water. 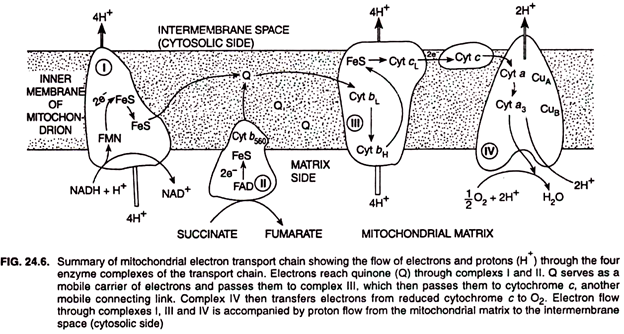