01. A body of mass ‘m’ moving with a constant velocity ‘v’ strikes another body of same mass moving with same velocity but in opposite direction. The common velocity of both the bodies after collision is

02. The bellow figure shows the three coplanar forces P, Q and R acting at a point O. If these forces are in equilibrium, then 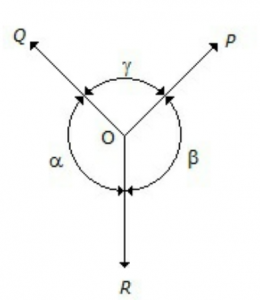 03. The centre of percussion of the homogeneous rod of length ‘L’ suspended at the top will be

04. The angle of inclination of the plane at which the body begins to move down the plane, is called

07. The C.G. of a plane lamina will not be at its geometrical centre in the case of a

08. If the masses of both the bodies, as shown in the below figure, are reduced to 50 percent, then tension in the string will be 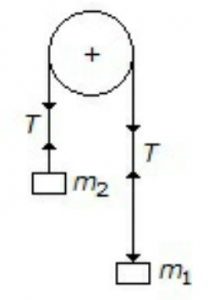 09. The moment of inertia of a thin rod of mass ‘m’ and length ‘l’, about an axis through its centre of gravity and perpendicular to its length is

10. Forces are called coplanar when all of them acting on body lie in

11. A rubber ball is dropped from a height of 2 m. If there is no loss of velocity after rebounding, the ball will rise to a height of

(A) Reversible
(B) Non-reversible
(C) Ideal
(D) None of these

13. Centre of gravity of a solid cone lies on the axis at the height

15. The resultant of two forces P and Q (such that P > Q) acting along the same straight line, but in opposite direction, is given by

16. When two elastic bodies collide with each other,

17. The coefficient of friction depends upon

18. The angular velocity (in rad/s) of a body rotating at N revolutions per minute is

19. A block of mass m1, placed on an inclined smooth plane is connected by a light string passing over a smooth pulley to mass m2, which moves vertically downwards as shown in the below figure. The tension in the string is 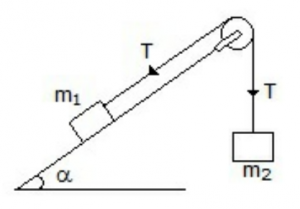 20. In determining stresses in frames by methods of sections, the frame is divided into two parts by an imaginary section drawn in such a way as not to cut more than

21. A machine having an efficiency greater than 50%, is known as

22. The algebraic sum of moments of the forces forming couple about any point in their plane is

24. Which of the following statement is correct?

25. A heavy ladder resting on floor and against a vertical wall may not be in equilibrium, if