Epistasis is the phenomenon where the effect of one gene (locus) is dependent on the presence of one or more ‘modifier genes’. Any gene or gene pair that masks the expression of another non-allelic gene is epistatic to that gene. The phenotype or the gene that remains suppressed is called hypostatic. Epistasis is of the following types.

In this case, recessive genotype (aa) suppresses the expression of alleles of another gene (B). Thus allelic pair aa shows recessive epistasis over B. Gene B, therefore, can be expressed only when and AA or Aa combination is present. Under these conditions 9:3:3:1 ratio gets modified to 9:3:4 ratio.

Coloured phenotype breeds true. It is recessive to agouti, therefore, coloured mice coat is not expressed in presence of agouti.  Albino breeds true and its white colour character behaves as simple recessive to any other coat colours. Albino (cc) however, is epistatic to A and therefore, ccAA would be albino.

Another example of epistasis is shown by pigmentation in onion bulb. There are three colours as a result of pigmentation:

These are also termed as complementary genes. This was shown by Bateson and Punnett in sweet pea (Lathyrus odoratus). The Purple coloured flowers are dominant over white. Two dominant genes C and P are essential for the production of purple colour (complementary genes). Absence of any one of these two genes prevents development of anthocyanin and the flowers are white.

In these cases, dominant allele (A) of one allelic pair expresses itself even in the presence of another dominant or recessive genes of another allelic pair; i.e., A is epistatic to B or b.

Fruit colour of summer squash shows dominant epistasis. The dominant alleles are W for white colour and Y for yellow colour.  The recessive genes (w and Y) for both the dominants expresses green colour. White allele expresses itself in the presence of another dominant Y and its recessive y.

Similarly, dogs show three types of pigmentation- white (W) black (B) and brown (w or b).

White (W) is epistatic to black (B) and would not allow black to appear as long as dominant white (W) is present. The ratio obtained coat colour in dogs would be 12 white: 3 Black: 1 Brown.

In this case two genes on different chromosomes in the dominant form have similar effect on the phenotype. Genes A or B are epistatic, i.e., suppress the effect of genes B and b or A and a respectively. This is also termed as duplicate genes and is illustrated by fruit (capsule) shape in Shepherd’s purse (Capsella bursa-pastoris). There are two phenotypes for the capsule shape: 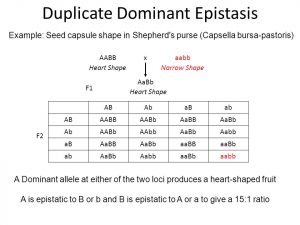 This is also termed as inhibitory factor. In these organisms dominant alleles of one gene (A) in homozygous (AA) and heterozygous (Aa) condition and homozygous recessive alleles (bb) of another gene produce the same phenotype. Therefore, AABB, AaBa, AAbb, Aabb and aabb produce one phenotype and genotypes aaBB or aaBb produce another phenotype. This results in phenotypic ratio of 13 :3 instead of 9 :3 :3 :1. In rice, gene p produces purple coloured leaf. Another dominant gene I present on another chromosome inhibits formation of purple coloured leaves and the leaf becomes normal green.

The I gene may be considered as epistatc over P. Therefore PI, pI and pi combination would show recessive character-green.  Only when Pi combination i.e., when P is present in presence of i (recessive), that it would express purple coloured leaves.

Supplementary genes are the genes which include two pairs of non-allelic genes, affecting the same character (modified dihybrid ratio). In his dihybrid ratio, Mendel considered two pairs of genes. Each pair controls a single character, e.g., one pair of genes controls character of height (i.e., tall and dwarf) while another pair of genes controls character of seed shape (i.e., round and wrinkled seeds). Such a dihybrid cross showed  independent assortment.

However, in poultry house there are two pairs of genes controlling a single character of comb shape. The two gene pairs are:

The cross clearly shows that R determines rose shape of comb and P determines pea shape, but when both occur together in an individual, these interact to produce an altogether different character (i.e., walnut shape of comb). Walnut shape is a modification of comb character determined by a basic gene and hence, these are termed as supplementary or modifying genes.

The ratio appears similar to that of dihybrid ratio. During dihybrid ratio of independent assortment, four combinations belonging to two characters occurs, however, in this case four phenotypes of a single character occurs.

Similar ratios are obtained for seed coat colour in Lablab. Supplementary gene in recessive condition has no effect on seed coat colour. Dominant gene (K) independently produces khaki colour and its recessive allele (k) produces buff colour in presence of both dominant and recessive conditions of supplementary gene. The effect of K in presence of L changes to chocolate colour.  Thus the ratio is 9 chocolate : 3 khaki : 4 buff coloured.

In snapdragon (Antirrhinum majus), the supplementary genes control the inheritance of flower colour. Magenta colour develops when gene B supplements gene A. The ratio  is 9 Magenta: 3 Ivory: 4 white. 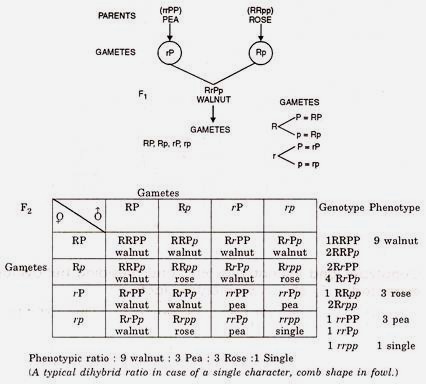