Monoploids have a single basic set of chromosomes e.g., 2n=x=7 in barley or 2n=x=10 in corn. Haploids, on the other hand represent individuals having half the somatic chromosome number occuring in normal individual. Therefore, individuals having 2n=3x=21 in wheat would also be haploids. These latter kind of haploids obtained from polyploids are often termed as polyhaploids in order to distinguish them from monoploids. G. Kimber and R. Riley classified haploids into euhaploids and aneuhaploids. 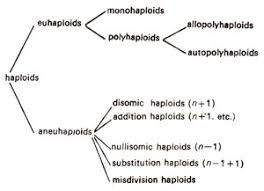 Origin and production of haploids

Haploids in some cases as in male insects (Hymenoptera) occur as a routine and are produced due to parthenogenesis. In these insects, queen and drones are diploid females. Haploids may also originate spontaneously due to parthenogenetic development of egg in flowering plants. Such rare haploids have actually been obtained in tomatoes and cotton under cultivation. Rarely haploids may originate from pollen tube rather than from egg, synergids or antipodals of embryo sac. These haploids will be termed as androgenic haploids. Following are some of the methods for the production of haploids:

Among different available methods for haploid production, the most important are distant hybridization and anther culture. 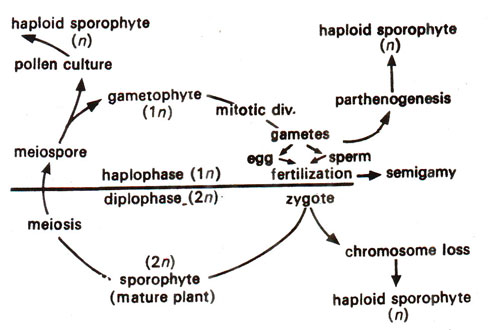 Interspecific crosses in genera of Solanaceae, were useful in the production of haploids, both parthenogenetic and androgenic. Haploids by this method have also been produced in potato in large number.  K.J. Kasha from University of Guelph, Canada evolved an excellent technique for producing haploids in large number in barley. He discovered that if the cross between Hardeum vulgare and Hardeum bulbosum is made, chromosomes of Hardeum bulbosum are eliminated in early zygotic divisions, so that a few days after pollination, embryos can be cultured to get haploids.

The production of haploids by anther and pollen culture was demonstrated for the first time in the laboratory of S.C Maheshwari of Delhi University ( Guha and Maheshwari, 1970). Subsequently haploids by this technique could be produced in other plant genera e.g., Oryza and Nicotiana (tobacco).This technique is a very potential source of haploid production.

A reduction in size of all vegetative and floral parts is a characteristic feature of haploids. Only rarely a haploid may equal or exceed the diploid in size. When haploids were studied in Nicotiana by D. Kostoff, it was found that leaves, flowers and overall plant size were smaller. The seed size, stomata size and pollen diameter were also generally smaller in haploids than in the diploids. In many cases in haploids, the size of nucleus measured as nuclear volume was half than in diploids.

Since in a haploid set, the chromosomes are non-homologous and have no homologues to pair with, they occur as univalents at metaphase 1 of meiosis. Consequently, these univalents distribute at random during anaphase 1. For instance, a haploid in maize (2n=20) will have 10 chromosomes and the number of chromosomes in a gamete of haploid plant can range from 0 to 10. Consequently, considerable sterility will be found. Moreover, since univalents  scatter all over the cell, they may constitute a restitution nucleus including all chromosomes and may thus give rise to gametes having a complete haploid set of chromosomes. Haploids (polyhaploids;2n=3x=21) were helpful for the production of monosomics by pollinating the haploid by pollen from a diploid individual (Hexaploid;2n=6x=42). If the egg has a chromosome number, one less than the complete set, this will result into a monosomic.

1.The most important use of haploids is in the production of homozygous diploids.

2. Haploid production can be useful for the introduction of disease resistance genes into cultivars.

Sets of chromosomes in human

Human beings are diploid species because they carry two sets (2n) of chromosomes, each with 23 chromosomes (n= 23), one derived from the father and the other from the mother. Some cells in human beings, the gametes in particular, have only one set of chromosomes (n), and are therefore termed as haploid. Two haploid gametes fuse together during fertilization to form a diploid zygote.

Some cells may have more than two sets of chromosomes present in them. Such cells are termed as polyploidy cells. They could be triploid, tetraploid, pentaploid, and so on.

However, if one or more chromosomes (not an entire site) are missing, or are present in excess, then the cell represents a state termed as aneuploidy. Aneuploid cells do not contain multiples of the haploid number of chromosomes. People suffering from Down’s syndrome are common examples of those exhibiting aneuploidy. Such people have 2n + 1 chromosomes (47 chromosomes).